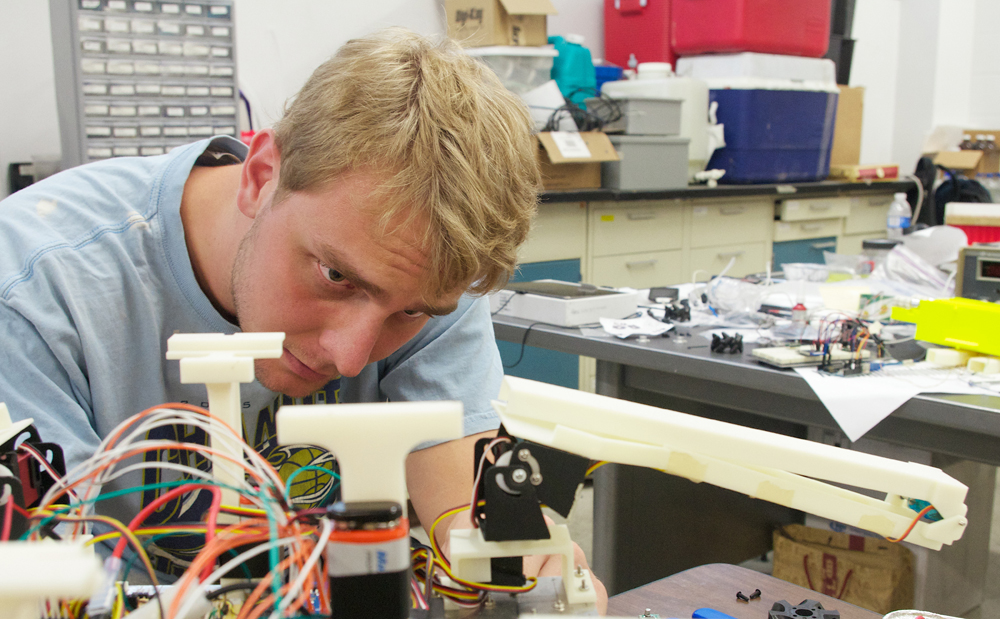 The K-State Robotics Team continued a winning tradition by earning its sixth consecutive victory at the American Society
of Agricultural and Biological Engineers Robotics Competition, held July 29 through Aug. 1. The ASABE
tournament began in 2006, and the robotics team has never
lost the competition.

The robotics team contributes its success to each
member’s drive to win. Naiqian Zhang, professor of biological and agricultural
engineering and adviser of the team, says that a winning attitude is what he expects.

Members of the robotics team said they take this message
seriously. Jared Barker, graduate student in biological and agricultural
engineering, said that the time and effort involved was worth the win.

“We all take this seriously. This isn’t a pastime for us,”
Barker said. “Our people stick with us all throughout. We are extremely
dedicated to the team.”

The ASABE robotics competition is international, meaning the K-State team competes with
schools across the nation and around the world in a contest to see which team
can build a robot to efficiently complete an agricultural-specific task set for
it by the ASABE. A new task and information is sent to the competing schools
every year.

“As soon as the idea for the next tournament is published,
we go into design,” Zhang said.

This year’s event was to build a robot to feed cattle in a
feeding trough. The team built two robots, named Plan A and Plan B, each of which utilizes a different method to accomplish the same objective.

“Plan A is the main competition robot,” Barker said. “Plan B
is also built for competition; it’s actually the goal. This year, it just
turned out that Plan A worked better.”

Each competing team builds their own robots with no
knowledge of the competitors’ versions. K-State’s robotics team splits into
groups to build both robots. The
process is recorded through photos and video, but it is strictly forbidden to publish, post or print any media
recorded for the machines.

“We’re very secretive about what we build,” Barker said.
“Everyone is wondering what the other team is doing, and you begin to hear
rumors about other teams’ robots. It goes to show how serious we are about the
event. It’s interesting, actually.”

Undergoing proper preparation for the competition can,
and often does, span months of time. Barker and Xu “Kevin” Wang, graduate
student in biological and agricultural engineering, both agreed that the time-consuming process directly resulted in defending K-State’s title at the
tournament.

“The reason we put some much time into is because of our
slogan,” Wang said. “We are there to win the competition.”

Winning means staying in the robotics lab in 134 Seaton Hall for hours of work.

“We started working this year in January,” Barker said.
“We’d stay in the lab until 3 to 5 a.m. and then come back in that morning. Working
over the summer was especially intense. It took up my entire summer.”

The process is so long and extensive because the team designs, builds and tests so thoroughly.

“We test the robots for an entire month,” Zhang said.
“During that time, we find every problem and fix that problem so we are fully
prepared. We go over every detail and leave no stone unturned.”

Wang believes that kind of security is the key to K-State’s
success.

“We prepare for the worst conditions,” Wang said. “That’s
how we win.”

With the streak of victory upheld once more, the team looks
to the future and begins planning for next year. That planning involves
recruitment.

“We’re glad to have experienced people along with new
members,” Wang said.

The robotics team is open to all K-State students.
Barker said that he hopes new people will approach the team with interest.

In the future, with enough members, it would be possible for
K-State to participate in the tournament with two separate teams. It’s only a possibility, but Barker said he is still excited for the chance.

More
than anything, Barker said he enjoys the robotics team because of its educational
benefits.

“The experience you get here will be difficult, but you
won’t get training like this anywhere else,” Barker said. “It’s really the
complete package.”