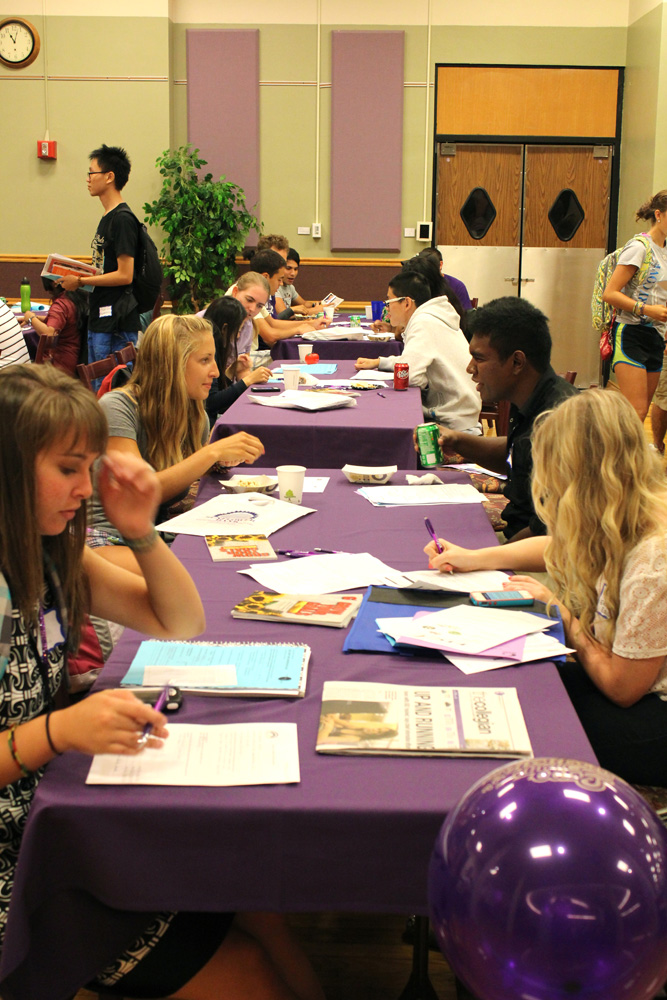 The doors of the K-State Student Union were open wide for students looking
for jobs at the Part-Time Opportunities Fair on Thursday. The event hosted booths for K-State affiliated jobs, as well as representatives from outside vendors.

K-State students attended the event, and high school seniors
were invited to attend as well. Amanda Tammen and Corey Britain, seniors in family studies and human services, said that they had decent luck.

“It’s been pretty good so far,” Britain said. “We’re looking
for internships right now and we’ve found a few that we’re interested in.”

Job opportunities and internships were available for
students of several age groups and interests. Participants wore nametags with
both their names and majors displayed so that representatives from the booths could spot students who might be interested in the jobs they offered.

“We’ve had an excellent turnout so far,” said Michelle
Bowen, director of human resources for Hale Library. “This is definitely a
great resource for us.”

Students visited and received information from more
than 50 booths throughout the Union Ballroom. Britain and Tammen found certain
booths more interactive and appealing than others.

“Some booths are really small,” Britain said. “I couldn’t
see their information. I thought the bigger booths with more signs were most
effective.”

Tammen said she felt that the booths’ different organizational styles represented what working for those companies might be like.

“I went to the booths with brochures that were lined out and
organized,” Tammen said. “I think those booths were more serious. I hope that
the people who we talked to liked us and we made a good impression.”

“I really want an internship for this school year,” Fritson said. “The one I’m
going for is an eco-friendly organization I heard about. I’m going to give it a
shot.”

The opportunities fair gave companies such as Sears and
Buckle a venue to reach out to students, but K-State’s own organizations also
greatly benefit from the event. Hands On K-State and the K-State Libraries were
both present at the fair.

“I think we’ve visited with over 150 students so far,” Bowen
said. “I know we started with 100 cards to hand out, and they’re all gone. Typically
students will apply to work on our website. We usually have a huge response
after the fair.”

Students found valuable experience in the fair as well.

“I think this was a good way to get our feet wet,” Tammen
said. “I like this way to be involved in the university.”

The overall goal of the fair is to get students connected
with employers, according to Bowen. She said that her booth achieved
success.

“Now, hopefully, we will have 100 students ready to be
employed,” Bowen said.

“I think that once I leave here I’ll have found a good
place to work,” Tammen said.