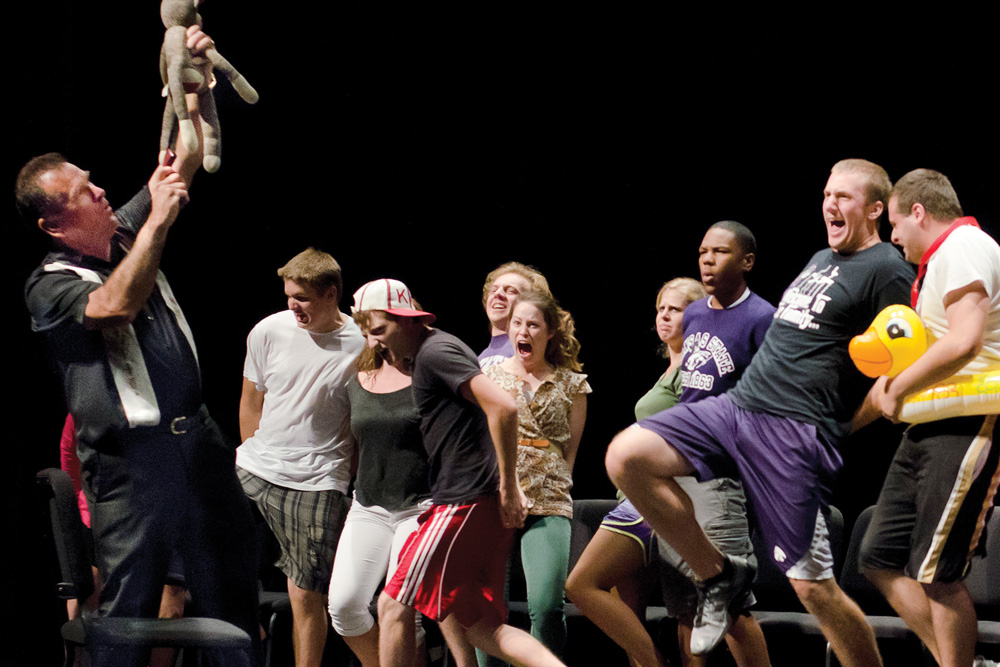 Hypnotist Chuck Milligan returned to K-State for the second year in a row on Saturday, sponsored by the Office of Student and Activities and Services and the Union Program Council.

“You should see this pretty young lady down here in the
front row,” Milligan said, halfway through his performance. “What a ring she’s got on. Man, her
boyfriend must be rich. Look at the size
of that diamond!”

A different audience member then responded, “I’m Dopey,
Snow White. Here I am.”

The two were just audience members at the beginning of
Milligan’s performance, but they became part of the show after he hypnotized them.

Milligan made his way up to the audience member and told him that he was Snow White and when he heard the word diamond, to get up and yell out “I’m Snow White. Where’s
Dopey?”

Milligan proceeded to the next audience member, put him to sleep and
told him that he was indeed Dopey, trapped in the mine for weeks and when he
heard Snow White’s voice, he would yell out “I’m Dopey, Snow White. Here I am”
and proceed to give Snow White a hug.

As families and students filed into McCain Auditorium, some
were hesitant to believe and decided to sit and watch. Others were hopeful to be chosen to be on
stage and to experience firsthand what it was all about.

“I wanted to see if it was real,” said Rotem Arieli, freshman in open option.

Lindsay Seele, junior in communication science, could
have been hypnotized, but ended up taking a different route.

“I tried to [be hypnotized], but I decided to watch instead,”
said Seele.

Throughout the performance, Milligan hypnotized people into believing they were in a number of different situations, including a life guard who became increasingly angry at the audience members, who
were swimming in his pool, and a young
lady with a bat destroying make-believe cockroaches on the stage. He also entertained the audience by convincing audience members they had new or different body parts.

“I enjoyed when [Milligan] put the boobs on the guy,” said
Colton Gentry, a junior in financial planning.

Another favorite was the “Snow White and Dopey” reunion,
but there were other antics that made people laugh.

Three individuals were selected and were each instructed a different way to count. The first person would skip three, the second used the number two twice, and the third, “Snow White,” counted nothing but twos. The first two individuals
were put together to figure out how to make it to 10 on their fingers,
while “Snow White” sat behind them, trying to make them see that their counting
was wrong because everything was two.

The final performances finished the night with great
applause as “Shakira” “LMFAO” and “Britney Spears” were all given a chance to
shake it on stage and to perform their hearts out before finally waking and
realizing what happened.

“It was amazing,” Arieli said after she concluded her performance as “Shakira.”

Others had different perspectives on the experience.

“It was weird,” said Talia Sepe, freshman in food science and Arieli’s friend.

Throughout the performance, laughter emanated from the audience in McCain Auditorium.

“I hope they make me a regular for
the Week of Welcome,” Milligan said.