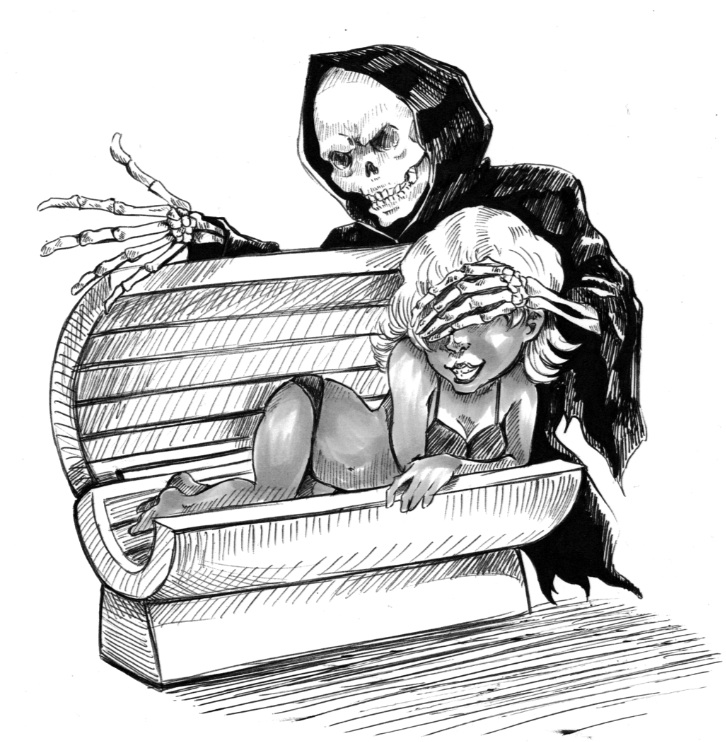 Many young adults spend as much as 20 minutes a day in a tanning booth making themselves susceptible to many diseases such as melanoma. However, recently tanning salons have started fighting back by saying not tanning is more dangerous than tanning.

While
flinging insults at one of her fellow “Jersey Shore” housemates, Nicole ‘Snooki’
Polizzi said, “You’re f—ing pale and you’re nasty,” implying that a person could
not be attractive if he/she had not tanned their skin until they looked like a
baseball glove. Snooki is not alone in her fight against paleness; recently, tanning salons across the country have come out fighting against dermatologists
who discourage tanning.

These salons say that doctors are causing their
patients serious damage by telling them not to tan. One website, tanningtruth.com
even goes as far as to say that “saying that sunlight is harmful and therefore
should be avoided, is as misleading as saying that water causes drowning, and
therefore we should avoid water.” What they fail to mention is that tanning beds and
booths have seven times as many UV rays as the actual sun.

According
to an Aug. 23 PBS article by Ellen Rolfes, there are 5,000 more tanning salons in America than there are McDonald’s fast food chains, which means that it is easier to get golden skin than it is to get golden
McNuggets. The $5 billion a year industry is also the backbone of more than 19,000 small businesses.

With so much money on the line for so many people, it makes
sense that tanning salons are trying to save face by pointing the finger in the
opposite direction. Tanningtruth.com said by not tanning, people can suffer from
Vitamin D deficiency which is linked to heart disease, multiple sclerosis,
diabetes and most forms of cancer. Vitamin D deficiency is also the cause of
more than 400,000 deaths a year, according to the website. Sunlight,
artificial or not, is not the only way to receive Vitamin D. Tanning Truth
fails to mention other ways to avoid Vitamin D deficiency.

Now, the
loss of those 400,000 lives is nothing to scoff at, but compared to the 2 million cases of skin cancer reported by the American Cancer Society each year
it seems pretty minute. The most deadly of all skin cancers is called melanoma
which accounts for 75 percent of skin cancer fatalities each year. The American
Cancer Society named unprotected or excessive use of tanning beds and booths as
the number one cause of skin cancer.

Tanning
Truth has not glossed over the facts about melanoma, but they say there is no
hard evidence connecting indoor tanning to skin cancer. However, what they don’t
say is that there are eight times as many cases of melanoma in young women as
there were in 1970.

I don’t think it is a coincidence that in that time period, indoor tanning also became popular. An April 2 Time magazine article by Alexandra Sifferlin said, that while melanoma is
usually more common in men, the number of cases in young males has only quadrupled in the last four decades. This difference could very well be because young females are
those most likely to spend their days darkening their skin artificially.

A real
punch is thrown at the American Cancer Society when Tanning Truth calls them
out for focusing on young women with their melanoma awareness campaigns when
those most likely to have the disease are men over 50.

What is clearly
misunderstood is that young women are most likely causing themselves to have
melanoma by chasing a trendy bronzed complexion, while it is less likely that
older men can do anything to stop melanoma from affecting them; older men affected by melanoma are developing it not by choice, but from the natural
sun and aging. However, the American Cancer Society is also at fault here. They
should not be singling out one group and ignoring an even higher risk group.

The
real question isn’t what causes skin cancer, it’s why would someone want to put
themselves at such a high risk. Is it the allure of constantly looking like an Oompa-Loompa? Has Snooki’s life impacted people in such a way that they will
try as hard as they can to live like her in hopes of one day having a reality show on cable?

Maybe indoor tanners are simply thrill seekers who want to
see how long they can stay in a booth before it changes their lives for the
worse. Regardless of the answer, indoor tanning is not safe and the tanning
industry can try as hard as they want to point the finger at someone else, but they need to remember there will always be three orange fingers pointing back
at them.