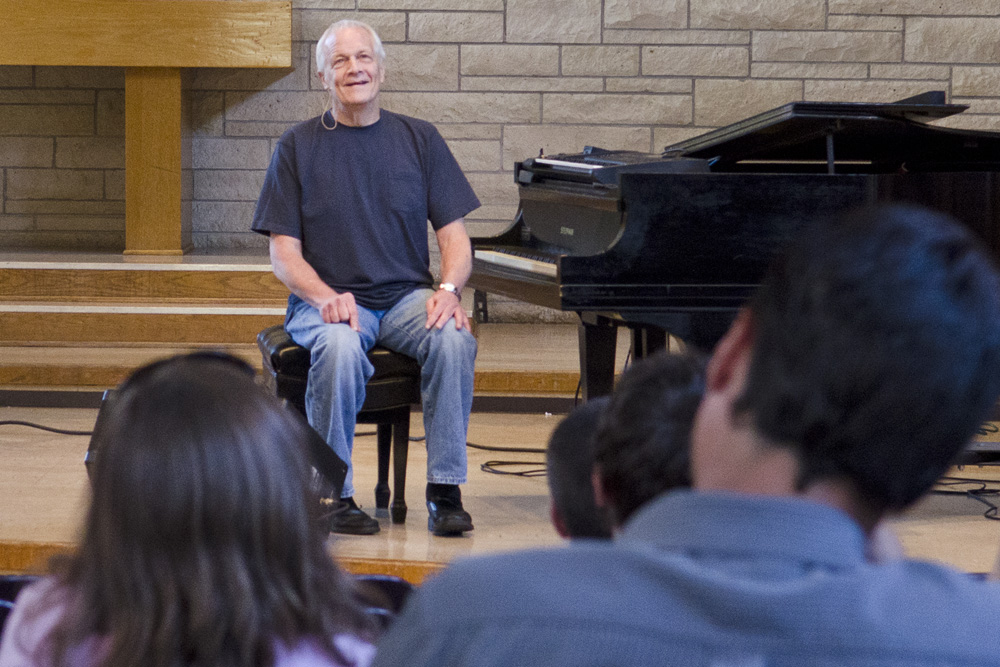 The walls of the All Faiths Chapel rattled on Monday evening as Ken Medema, a guest speaker, shared his musical talent of improvisation with the “Signals, Systems, and Music” electrical engineering class at K-State.

“Come with me and we’ll make music with amps, circuit boards and resistors,” Medema said during his composition.

The course is made up of both engineers and musicians to help focus on the importance of learning a similar discipline other than your own. The course objective is that engineers gain something from the musicians as well as the other way around.

The students will later be writing a musical composition in pairs; one musician will be partnered with one engineer.

Medema taught the students the importance of storytelling when composing music.

“I am as much of a storyteller as I am a musician,” Medema said. “Storytelling, to me, is my motivation.”

Medema played the piano and improvised his lyrics as he played special sound effects that he made himself.

“I create my own sounds and when it’s time to record, I have all these sounds at my disposal,” Medema said.

He also encouraged the students to experiment with different sounds.

The class, which meets every Monday at 5:30 p.m., is made up of several engineers, mainly mechanical and computer, and musicians.

“Many of the aspects of engineering have their counterparts in music,” said Stephen Dyer, professor of electrical and computer engineering and one of the two professors for this course.

The course is designed in such a way that musicians and engineers can share the language of each other’s profession. Medema demonstrated the deep connection between engineering and music composition.

“He gave me so many ideas for my own music,” said Bryce Craig, senior in music and music composition. “Music should be about telling a story and I’ve never seen someone who could do it like he did.”

For Craig Weston, associate professor of the school of music, theatre and dance and the other professor for this course, Medema’s visit to the class was more than informative; it was also moving.

“It was the most inspirational thing I’ve ever seen,” Weston said.

Medema was born blind and began playing piano when he was 5 years old. Medema had a fairly rough childhood. He spent all of his free time practicing the piano. His family was very supportive of him; his classmates, however, were not.

“The world is not going to cater to you,” Medema said.

His mother went searching for a piano teacher when he was 8 years old and had trouble finding one who would accept him. She told the one who eventually did, “you want this kid as your student.”

Medema graduated from Michigan State University with a bachelor’s and a master’s degree in music therapy and worked at a hospital helping children with special needs and performed at concerts for fundraising, including Habitat for Humanity.

After being laid off from his job, Medema decided to travel and hold concerts. He currently has 27 albums recorded.

“I think it was fantastic,” Weston said. “[Medema] showed creativity can be tapped into in very different ways.”