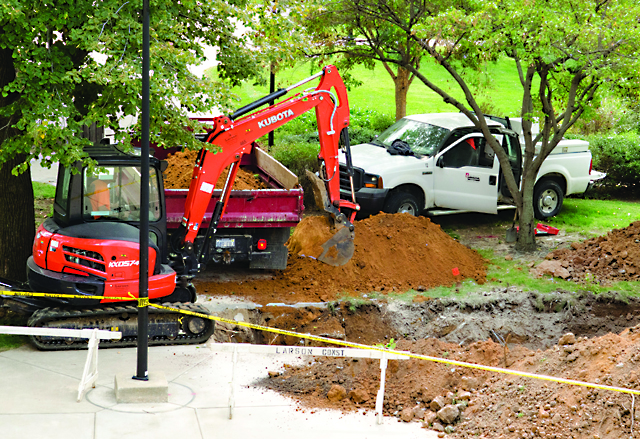 When students and faculty walked through the south part of the K-State campus on Monday, they saw something they did not expect: the area between Calvin and Kedzie halls was blocked off for construction.

As onlookers watched and others skirted around the site to get to their next class, workers sawed and dug their way through slabs of concrete and layers of dirt and mud to access a leaking waste pipe.

“We are working on repairing a main sewer line,” said Joe Reed, construction worker with Larson’s Construction Inc. “The university hasn’t really told us much besides that the pipe was leaking. They called us over this morning and we’re making sure the problem is taken care of.”

Tom Hodges, Larson’s employee, said the problem was a routine fix and the plumbing issues were not caused by any unusual circumstances.

“It’s mainly from just normal wear and tear on the pipes,” he said.

The construction project, which workers estimated would be wrapped up by this afternoon, consists of an 11-foot hole that the workers dug with bulldozers and other heavy machinery to access the leaking sewage pipes.

As a safety precaution, the workers also closed off sidewalk space nearest to the construction, causing many students to walk around the piles of dirt and gravel.

“It’s definitely an annoyance but I guess it has to be taken care of,” said Chris Harrison, senior in marketing. “I just wish the university maybe did a little bit more upkeep during the summer when there isn’t as much campus traffic. It just kind of sucks having to walk through all of this dust.”

According to Jack Carlson, project manager of facilities planning, K-State allocates funds at the beginning of the year specifically to cover unexpected facilities maintenance expenses that come up throughout the year.

“Part of the money that we use for things like this come from the state and part of it comes from things like students’ tuition and privilege fees,” Carlson said. “These kinds of things come up over time, so we need to make sure that we plan it out.”