Bramlage Coliseum played host to a showcase of dances that had themes from “Welcome to the Jungle” to “Willie Wonka” on night Wednesday as the greek community showcased their creative talents at the Wildcat Request Live competition as part of Homecoming week. Each  group performed in front of an audience and a panel of judges.

“It’s a great way to get students who aren’t on Classy Cats to show their talents as well as the greek community,” said Janie Kluempers, member of Gamma Phi Beta sorority and senior in athletic training. “It’s cool to have a variety.”

Kluempers said that a lot of time and preparation was put into her Homecoming routine. The group practiced three times a week in an effort to let as many members participate as possible.

“In a big school, it’s hard to get everyone together,” Kluempers said. “It’s a great way to get the community involved.”

Students in the crowd cheered and chanted with each Homecoming group that performed.

Gage Robertson, freshman in architectural engineering, said he enjoyed the show as an audience member.

“I thought it was comical, thrilling and all around entertaining,” Robertson said.

Although each Homecoming groups’ performances was different, there were some similarities.

Robertson said that WRL enhanced the experience of Homecoming by letting the community understand we are one big K-State family.

“I feel Homecoming is a chance for everyone to go above and beyond what everyone does on a day-to-day basis and show everyone how we feel and how proud we are to be an EMAW nation,” he said.

Brishna Flores, freshman in bakery science and management, watched the performances from the audience as well. As a freshman, she related the events to her high school homecoming in past years.

“It’s different than high school,” said Flores. “Everything is more laid back and hyped up at the same time.”

“During Homecoming week, I feel like the community has a chance to see K-State come together as a family,” she said.

The winner of the WRL competition will be announced at the conclusion of all Homecoming activities. 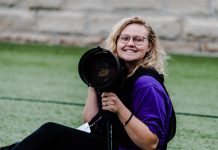 OPINION: A photojournalist’s guide to learning on the job, finding new work 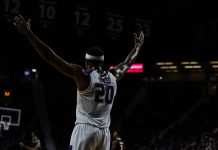 Game Day at a Glance: MBB remains on top after defeating Texas Tech at home 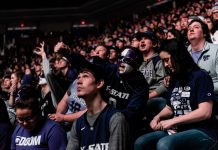