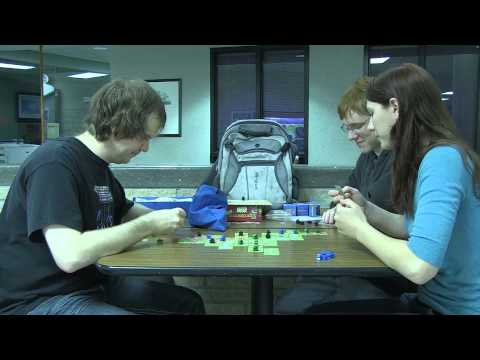 Most people are familiar with classic board games like “Monopoly,” “Life,” “Risk” and “Clue,” but most are probably not familiar with the new wave of board games, which includes titles like “Settlers of Catan,” “Carcassonne,” “Dominion” and “Ticket to Ride,” that has spread to America in recent years.

Eric Zimmerman, a professor at New York University told the Boston Globe in March that board games are experiencing “kind of a renaissance.”

The renaissance began in 1995 with the release of the game “Settlers of Catan” in Germany. “Settlers” soon achieved widespread success outside of Germany, and even outside Europe, selling 15 million copies around the world to date. In a 2009 article about its rise to success, Wired magazine called “Settlers of Catan” the “Monopoly killer.”

Though the board game culture has begun to spread around the world, Germany remains its center. Germany publishes more board game titles per capita than any other country, and the German city of Essen is host to a board game festival that regularly attracts over 150,000 attendees, crowds even larger than the San Diego Comic Con.

Fans often refer to the new wave of games as “German-style board games,” alongside other monikers like “Eurogames” and “designer games” (referencing the fact that the games’ designers, e.g. Reiner Knizia and Klaus Teuber, are often as well known as the games themselves).

A natural question about the new wave of Eurogames is what makes them different from American games? The biggest difference, some say, is the amount of decision making. While games like “Candyland” and “Chutes and Ladders” almost never require players to make choices, Eurogames typically make a point of presenting players with options each turn.

For example, “Ticket to Ride,” a train-themed game, allows a player to either build a train track or draw new cards during his turn, but not both.

“You’re always asking yourself, ‘Should I get the rainbow card before someone takes it, or build a track before someone else builds it?” said Ethan Merritt, junior in architecture. “Then, toward the end of the game, you wonder if it’s worth it to try building a new route or just make your track longer. There are all these judgment calls every step of the way, and it really makes the game interesting.”

Another notable difference from American games, as described by the Economist in 2008, is Eurogames’ tendency to use economic themes and indirect competition between players.

American games like “Risk” and “Heroscape” often have players invading and directly combating other players, while Eurogames foster interaction by having players compete for resources or claim territories economically.

“One of the great things about [“Carcassonne: Hunters and Gatherers”] is that there’s such a variety of subtle ways to screw people over,” said Ben Detrixhe, senior in geography.

He also admitted that he had to tone down his backstabbing tactics when showing the game to his mother, because, “Otherwise, she’ll never want to play again.”

European game designers also commonly give players something to do while waiting for their turn. In “Settlers of Catan,” inactive players can still trade resources with the player taking his turn.

In the French game “7 Wonders,” players take turns and decide which cards to play at the same time, so they’re never waiting. In contrast, Blake Eskin of the Washington Post wrote in November 2010 that, “[In “Monopoly”] there’s little to keep you occupied when it’s not your turn; and you can keep playing for hours after it has become clear who’s going to win.”

The Eurogame culture is still considered a niche in America, but signs of popularity are emerging.

Merritt mentioned the existence of a “Settlers of Catan” drinking game at K-State. One probably won’t find any Eurogames at Wal-Mart, but other retailers like Barnes & Noble and Hastings (including the Manhattan location) have begun carrying popular Eurogame titles.

Giants like “Settlers of Catan,” “Ticket to Ride,” “Dominion” and “Carcassonne” all have adaptations on the iPhone.

American game importer Rio Grande Games managed to grow 30 percent per year through the recession, and PlayCatan.com‘s fastest growing segment is its American user base. Though the foreign board game renaissance hasn’t dethroned Hasbro as the king of board game sales, it is certainly catching fire in America.

Facebook
Instagram
Twitter
Youtube
Advertisement
Sign up for our Newsletter
About
The Kansas State Collegian is the daily newspaper at Kansas State University in Manhattan, Kansas. Its content is reported, edited, and produced entirely by students, and students make up the advertising sales staff. It is published Monday, Wednesday and Friday when classes are in session during the academic year, and weekly over the summer.
© 2018 Collegian Media Group | Privacy Policy