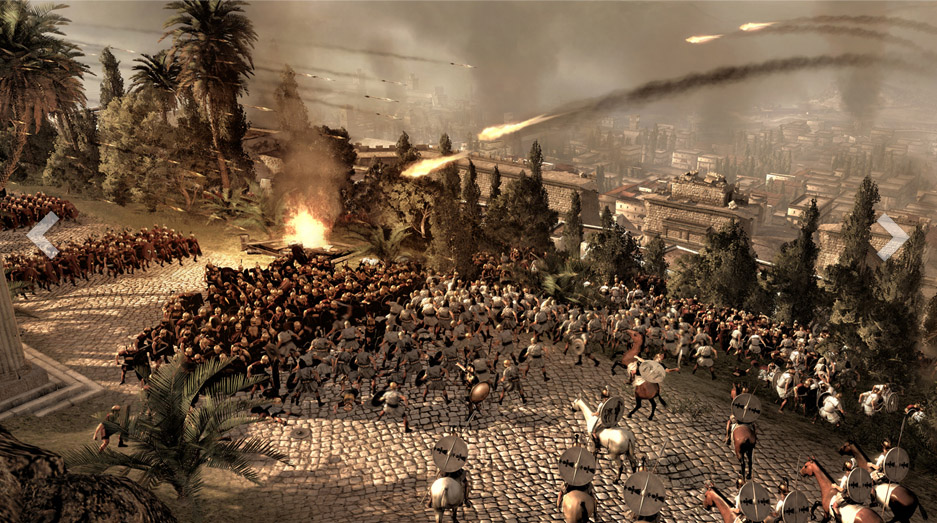 “Total War: Rome II” is a long-awaited strategy game set in ancient Rome that will hopefully exit the vaults of The Creative Assembly in October of 2013, proudly hailing the series’ crowds of fans through countless discussion forums worldwide.

“Rome: Total War” is the granddaddy of this budding behemoth. Released in 2004, the game shattered the very concept of real-time strategy games forever. When “Rome: TW” was launched, it was acclaimed for its revolutionizing engine, breathtaking graphics (for the time), modestly historically accurate ancient combat and a never-before-seen quantity of little pixelated soldiers slashing the daylights out of one another by the thousands. It was so shocking to see so much epicness onscreen that “Rome: TW” served as the focal point of two TV programs: “Decisive Battles” by the History Channel and “Time Commanders” by BBC 2.

But will “Rome II” hold up to the glory of its predecessor? Little is known up to this point, but several factors provide evidence that this new installment will rock your world. The most recent preview depicts grand combat recreating the siege of Carthage. Thousands upon thousands of finely detailed, masterly crafted legionaries march toward the barricades whilst being pelted by flaming projectiles. Massive wooden siege towers protrude onto the landscape and chainmail-clad men scurry to operate them. If you are a history buff like me, the scene itself might leave you drooling.

The game’s developers, however, felt like being gracious and provided a little more depth. The earth-shattering aspect is simply the enormous size of the map which will host all the bloody combat and meat-grinder tendencies of classical warfare. In the trailer, the camera suddenly jumps outward into the heavens going from “awkward conversation closeness” to a “holy cow I’m looking at the whole city” perspective. This was all done with one single, smooth movement obviating any of those pesky loading screens that plague lesser games and torment the impatient while subtracting from the immersion.

Just when the combat is reaching its climax, a forlorn figure nears the Roman general. An insanely detailed and disturbingly realistic elephant charges through the rubble, disturbing the blurred veil of smoke faintly formed from fizzing, burning embers and crushed hopes. Any fan of RTS will realize that this game has an absurdly large potential, possibly as the next role model for future games of similar gameplay or time period.

David Mejia-Zaccaro is a sophomore in marketing. Please send comments to edge@kstatecollegian.com