With Notre Dame capping off an undefeated season with a 22-13 victory over USC last Saturday, it is pretty clear that the team will be heading to the BCS National Championship, with either Georgia or Alabama joining them. However, there are still a lot of BCS berths to be determined.

Pac-12:
No.16 UCLA at No. 8 Stanford
These two teams will be playing for the second time in six days. Last time, Stanford thumped the Bruins 35-17 behind a dominating defensive performance, earning talk of a trip to the Rose Bowl. If the Bruins are going to earn a berth in the Rose Bowl, then senior running back Johnathan Franklin is going to have to get going.

Against the Cardinal last Saturday, Franklin was only able to manage 65 yards on 21 carries. Without Franklin putting up big numbers, the passing attack led by Brett Hundley could not exploit the Cardinal down the field. The offense must play much better, as they are going up against a team that may be playing better than anybody else in the country.

In what was supposed to be a down year for the Cardinal, Stanford has taken their program to an even higher level. If it wasn’t for a bad call in a matchup versus Notre Dame, they could be playing for a national title berth. They have been that good. Even without Andrew Luck, they have been able to play great offense, led by senior running back Stepfan Taylor.

Unlike Franklin, Taylor had a monster game last Saturday with 142 yards and two touchdowns, also helping the Cardinal dominate the time of possession. On the season, Taylor had 1,364 yards and has proven to be one of the best running backs in the country. Look for the Cardinal to use him a lot against the Bruins.

Beating a team twice in the same season is never easy, especially twice in six days. However, with how this Stanford team is playing under the leadership of coach of the year candidate David Shaw, the Cardinal will win the Pac-12 title.

Big Ten:
No.12 Nebraska vs. Wisconsin in Indianapolis
These two teams last met on Sept. 29 as the Cornhuskers came back from a 17-0 deficit to win a 30-27 thriller, led by junior quarterback Taylor Martinez, who finished the game with 288 total yards and three touchdowns. The Cornhuskers got a boost on offense this past week as well, getting senior running back Rex Burkhead back from injury.

With Burkhead healthy, one of the most dangerous rushing duos in all of the country is back. He and Martinez complement each other as Burkhead gets the tough yards, while Martinez has the speed to take any run the distance. They will provide the Badgers a tough test, though Wisconsin counters with one of the most successful running backs in college history.

Senior running back Montee Ball has 4,838 rushing yards and 79 rushing touchdowns, the latter which is the most in NCAA history. Even without quarterback Russell Wilson, who left for the NFL, Ball has been able to have a huge year despite defenses loading the box with eight, sometimes nine guys. In the team’s first matchup, Ball finished the game with 93 yards, but also had to run the ball 31 times. The Badgers line must give him more room to run the ball, if they want to get the victory.

Both teams have a lot to prove. Nebraska can finally prove they belong in the Big Ten, while Wisconsin, who despite finishing behind Ohio State and Penn State (both of whom are ineligible for postseason play) are playing to prove that they deserve to be there. Look for a hard-fought Big Ten classic football game, and Nebraska to finally do what they need to get to the Rose Bowl.

However, it is not all good news in Tuscaloosa, as junior wide receiver Kenny Bell (25.4 yards per catch) broke his leg in the victory over Auburn. This will put a lot more of the pressure on the defense, who has to slow down one of the best quarterbacks in the country in Georgia’s Aaron Murray.

Murray has thrown for 3,201 yards and 30 touchdowns, and has really found a rhythm the last four games, where he has thrown 13 touchdowns and zero interceptions. While Murray is the leader of the offense, the defense is led by junior defensive end Jarvis Jones.

Jones has had a very interesting career to say the least. He started out at USC, but had a heart problem that the USC doctors thought was too serious for him to play, so they never cleared him. He finally found a home in Athens, Ga., and the rest is history.

Jones has 10.5 sacks, and has had a knack to be at his best in the biggest games, with three of those sacks coming in the huge victory over Florida.

Both of these teams understand the magnitude of this game, with the winner going to the national title, while the loser will most likely fall to the Capital One Bowl, which would be a huge disappointment.

In the end, coach Mark Richt will finally get Georgia to the next level, beating the Crimson Tide in a close one, moving on to take on Notre Dame in the national championship.

No. 11 Oklahoma at TCU
The Sooners are the only other team besides K-State that could win the Big 12 Conference, but they first have to take care of a dangerous TCU team. The game also marks the final regular season game of Landry Jones’ career, who has had one of the most up-and-down careers in recent history.

Every good game he has had has been followed up with a performance that frustrated fans. However, Jones showed the world last Saturday why he can be one of the best in the country.

Jones threw for 500 yards and three touchdowns in the thrilling 51-48 overtime victory over Oklahoma State in the Bedlam game. He will be put to the test though, going up against one of the top defensive end duos in the country in Stansly Maponga and Devonte Fields.

While the defense as a whole is very impressive for the Horned Frogs, the defensive ends flat out go after the quarterback. If there is one thing that has really gotten to Jones, it is when the defense is able to get pressure on him. He must be able to handle the pressure if he wants to lead the Sooners to a victory.

While Oklahoma needs K-State to lose to have a chance at the Big 12, the Sooners still have a very high possibility to receive a bid in the Sugar Bowl. Kent State is also a possibility to earn the berth, but face a very tough test in Northern Illinois. If the Sooners can win this game, they will have a very compelling case, with their only two losses coming from the No.1 and No. 6 teams in the country.

Look for Oklahoma to do enough to survive a very difficult road game, and to remain a very likely candidate to go to a BCS bowl. 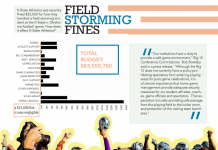 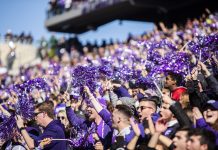 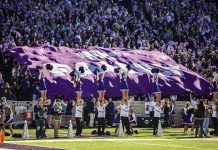