Editor’s note: This is part two of a two-part series on how Monsanto and GMOs affect farmers and the K-State community.

Monsanto is one of the world’s leading producers of genetically modified organisms, or GMOs, and has ties to many public universities, including K-State.

In 2010, K-State and Monsanto struck up a five-year contract to collaborate on research for wheat varieties. Monsanto provided DNA fingerprinting technology to K-State, which allows K-State researchers to more quickly and effectively create new varieties of wheat for farmers. In return, Monsanto gains access to the wheat varieties K-State produces for their own research.

“We felt the partnership with Monsanto was in the best interest of Kansas wheat producers,” said Gary Pierzynski, professor and head of the department of agronomy. “If we can produce and release wheat varieties faster, that will benefit the wheat producers.”

Pierzynski was interim dean of the College of Agriculture and interim director of K-State Research and Extension at the time that the deal was made. He said some people expressed concern that the partnership indicated K-State was producing GMO wheat, but this is not the case. There is no commercially marketed GMO wheat anywhere in the world, he said.

“Some people just don’t like Monsanto just for the reason that they produce GMOs,” Pierzynski said.

The relationship between corporations, such as Monsanto, and public universities is complicated, but it can be boiled down to one word: money. As universities lose state and federal funding, they look to other sources of cash.

The Kansas House and Senate have proposed to cut between $25 million and $30 million in funding to higher education in an attempt to help bring state spending under control, according to a March 19 article by Brad Cooper of the Kansas City Star. State funding for higher education in Kansas has dropped from $829.1 million in 2008 to $763.4 million this year — an 8 percent reduction overall. An April 18 article by the Kansas City Business Journal reported that the latest proposed reduction in funding would result in a $6.7 million cut to K-State’s budget.

Universities across the country face similar issues of budget cuts and reduced funding for research. Increasingly, universities are forced to find other ways to make up the difference, whether by raising tuition or by turning to the private sector for assistance.

In 2010, private donations from corporations made up nearly one-quarter of the money used for agricultural research in land-grant institutions, according to the environmental group Food and Water Watch. In 2012, Food and Water Watch released a report entitled “Public Research, Private Gain,” which suggests that corporate funding threatens academic freedom and influences the research conducted in land-grant universities across the U.S., which can cause a conflict of interest. One of the large corporate sponsors that donated significant amounts of money to these universities is Monsanto.

K-State has ties to Monsanto, but the university is not mentioned in the study. The reason, according to Pierzynski, is likely because the partnership between the two has been left open and flexible.

K-State’s research into wheat varieties is not influenced by Monsanto, and the university is allowed to trade research and genetic materials freely with other universities for the purpose of research.

Allan Fritz, professor of agronomy, also said that he believes there is no conflict in K-State’s research resulting from the university’s collaboration with Monsanto. K-State was very clear about retaining the freedom to share and work with other companies and colleagues, Fritz said.

“Those interactions are important, and we need to maintain those relationships,” he said.

Fritz also said it is important to note that there is no GMO wheat produced in the U.S., and that the wheat varieties produced by K-State are grown using traditional breeding methods. The DNA fingerprinting technology provided by Monsanto merely allows researchers to find the traits desired in wheat more quickly, cutting down the time it takes to produce a new variety of wheat from approximately 10 to 12 years to about seven, according to Pierzynski.

Part of the agreement was that K-State researchers could not directly market the wheat varieties they produced to the public; instead, they have to go through a third party. The Kansas Wheat Alliance, a nonprofit organization, commercializes wheat varieties produced by K-State researchers for farmers to grow and, in turn, uses the royalty fees collected from wheat producers to fund more research at K-State.
KWA was formed as a collaboration between K-State Research and Extension, the K-State University Research Foundation and the Kansas Wheat Foundation, among others.

According to Daryl Strouts, president of the KWA, K-State currently has eight varieties of wheat being sold to wheat producers across several states. The most popular variety, Everest, is the No. 1 variety in the state of Kansas. It represents about 14 percent, or 9 million acres, of all the wheat produced in the state.

“It’s competitive out there. A lot of companies are putting out wheat varieties,” Strouts said.

About 80 percent of the money KWA receives from the royalties goes back to K-State researchers. Their goal is to get to 90 percent. Last year, KWA gave about $425,000 to K-State for research. In a few months, Strouts said, the KWA will cut a check for just over half a million dollars. So far, much of the money has been spent on new equipment — something that had been neglected for many years because of state budget cuts, he said.

The five-year agreement between K-State and Monsanto is currently in its third year. When the contract is up, Pierzynski expects there to be an evaluation and more talks to see if Monsanto wants to continue the collaboration with K-State wheat researchers. Even with the accelerated process of production, it would still take about two more years for the partnership to produce a new variety of wheat, Pierzynski said.

“In a five-year agreement, we haven’t fully realized the possibilities,” Pierzynski said.

Strouts said he wants public institutions to maintain strong, viable wheat breeding programs. He does not want wheat breeding to be taken over by private companies the way other crops, such as corn and soybeans, have. 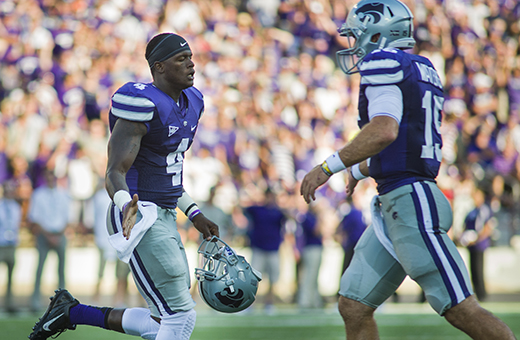