Home Culture Feature Campus bathrooms: the good, the bad and the very unappealing

When it comes to bathrooms, many students new to K-State — or any large university, for that matter — are in for a rude awakening. Students living in the residence halls may have to live with (and shower in) community bathrooms for the first time in their lives. Sometimes it’s hard to come by a little privacy, and that’s exactly the reason that incoming students need to know where the best and worst bathrooms on campus are.

First, my criteria. Call me crazy, but I like my bathrooms locked and lonely. As a result, I rank low-traffic, secluded restrooms higher than attractive but busy ones.

Second, the Department of Facilities works hard to maintain all bathrooms, but many buildings at K-State are very old, making repairs and renovations costly. What I mean is, don’t get mad at the facilities guys when you find a problem in a bathroom. They’re the ones working very hard and patiently to clean up our messes.

Last, a disclaimer: this is just one writer’s personal opinion. I certainly have not visited every bathroom on campus in my five years at K-State, and I only considered women’s and unisex bathrooms in this review.

The Worst
141-2 Cardwell Hall
Most incoming freshmen will have to take a math class during their first year. That means you may be spending a lot of time in Cardwell Hall, with many other underclassmen, a lot of whom are very nervous about math. You will need to use the bathroom at some point, but you probably won’t like it.

To start, the sign on the door isn’t even a real sign; it’s a piece of paper with the word “WOMEN” scrawled on it in thin green letters. Once you enter the bathroom, at least seven fliers warn visitors in all caps, “PLEASE do not throw paper towels in toilet” and “MAKE SURE YOU TURN FAUCETS COMPLETELY OFF AFTER USE.” And it’s loaded with narrow stalls, so you’re never comfortable and you’re never alone. But the worst part about stepping foot in this bathroom? Someone has always just taken a nervous math poop.

Willard Hall
Have you ever been in the basement of Willard Hall? I would guess the answer is yes only for art students and ladies who have to pee but don’t want to climb three flights of stairs. Anyway, that basement is creepy, and so are the bathrooms in Willard Hall. Moreover, they’re hard to find. The building has three floors and a basement, and every floor looks pretty much the same. It’s easy to get lost, and it’s even easier to forget which floor the bathrooms are on. Just so you know, men’s bathrooms are on the first and third floors, while women’s are on the second floor and in the basement.

Although, if you’re willing to venture into that dark, dank basement hall, you will find a unisex bathroom in room 9A with one toilet — and it locks. I know what I’m doing in there!
(Pooping. It’s pooping.)

Honorable mention: K-State Student Union
You might expect the Union’s bathrooms to rank pretty highly, but I have beef with these. Those automatic hand washing and drying stations seem pretty cool at first — you don’t even have to use your hands! You just put them in the sink and the sink does the rest! So luxurious! At least until you realize you have to use your hands again to open the door. These are very nice facilities, but considering the number of stalls in the bathroom and the amount of traffic that comes through, this bathroom is far more cramped and public than it’s worth.

The Best
243A Leadership Studies
This is how you make a good bathroom. Lots of space, less than a handful of stalls, and … A SHOWER?!? Yes, the second floor of the Leadership Studies Building contains both men’s and women’s bathrooms with a private, lockable shower and plenty of space for your clothes, bag and towel. The showers are there to encourage students, faculty and staff to ride their bikes to work, a fact that I was unaware of for the two years that the building has existed on campus. It is something to consider for incoming students who want to stay fit and minimize their impact on the environment. The private shower area in the women’s restroom also contains a table and comfortable chair where lactating mothers can go to pump their breast milk in solitude.

119 Kedzie Hall
Kedzie Hall, home of the A.Q. Miller School of Journalism and Mass Communications, has also been my home away from home for about half the weeknights of my last three years here. I have become intimately acquainted with the main floor of Kedzie Hall — the business office, the newsroom, and yes, the bathrooms.

The women’s bathroom on the first floor, in room 108, holds a few stalls and a couch with a coffee table, but that’s not even the best one in Kedzie.
119 Kedzie Hall houses perhaps the roomiest, most centrally accessible, lowest-traffic and most private bathroom on campus. It contains one toilet, one sink, one paper towel dispenser and one door that locks. Who can ask for more? Not a lot of people know about this bathroom. At least, they didn’t before now. You’re welcome, K-State.

Honorable mention: 113 Leasure Hall and other lactation rooms
Leasure Hall contains one women’s bathroom on the first floor. It has two stalls and one sink. It is not perfect. But it also contains a second room especially designed for the needs of mothers, with a latching stall that contains a large armchair, a lounge hidden behind a blue wooden screen, and other miscellaneous seating. There, lactating mothers can pump their breast milk in privacy.

113 Leasure Hall is one of several lactation rooms scattered across campus. Other rooms include 207A Willard Hall, 016 Anderson Hall, 202 and 302 Umberger Hall and the aforementioned 243A Leadership Studies. These are great places where any women can go for some extra comfort and seclusion, but please have respect for the privacy of others.

Are there other great and terrible bathrooms on campus? Let us know in the Fourum! To submit your Fourum contribution, call or text 785-260-0207 or email thefourum@kstatecollegian.com. Your email address or phone number is logged but not published.

Katie Goerl is a graduate student in history. Please send comments to edge@kstatecollegian.com. 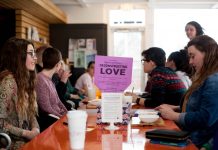 Find your fit: Eight ways to get involved on campus 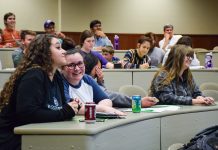 QUIZ: What kind of freshman are you?