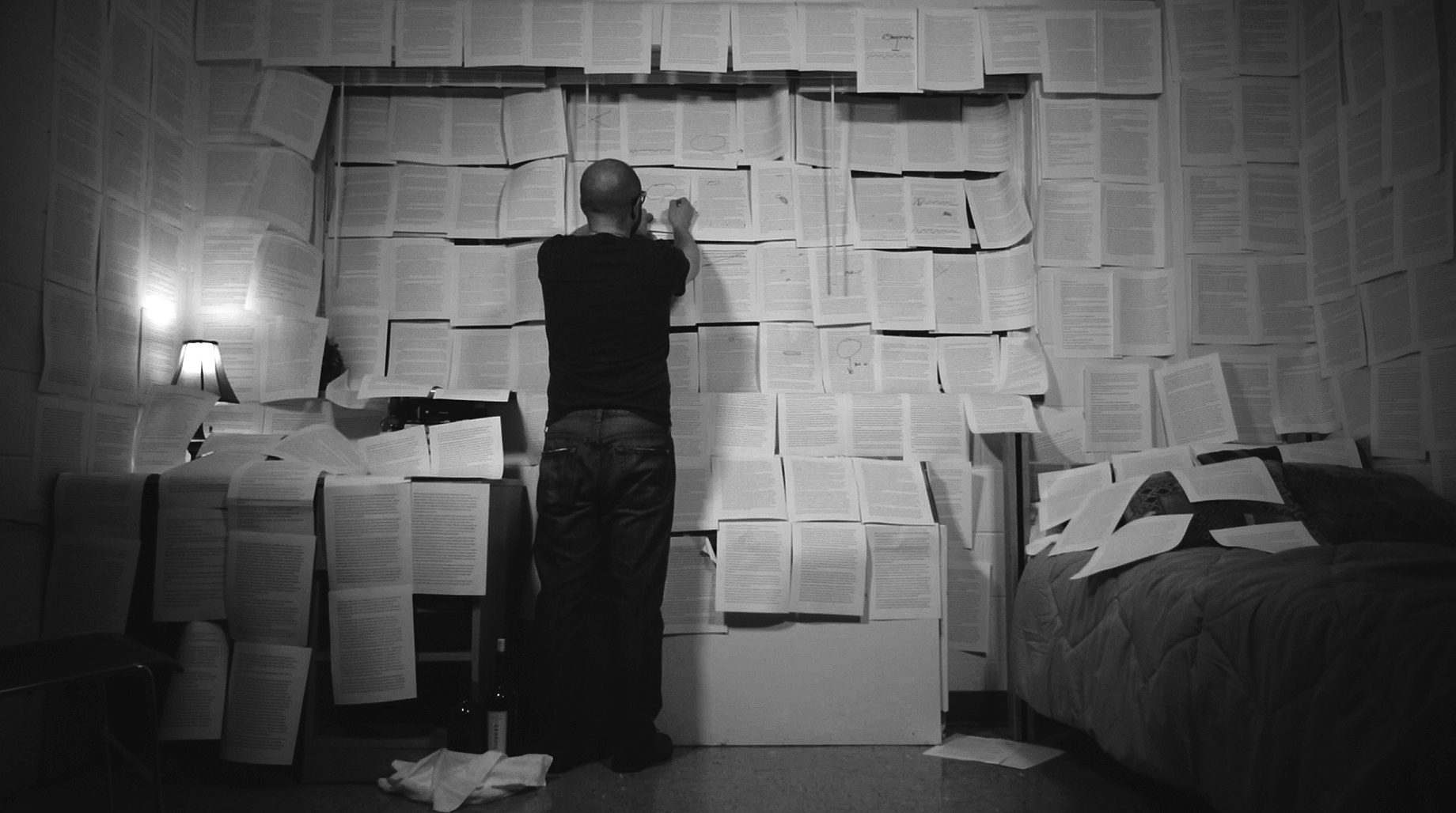 On Thursday, in a tip of the hat to Woody Allen and his 1979 film “Manhattan,” three K-State alumni held an advanced screening of their own love letter to a spot they love full well. George Stavropoulos, Ryan Bruce and Bret Palmer shared their over yearlong project to family, friends and those who helped them along the way – totaling 300 – in a rented Carmike Seth Childs theater.

Stavropoulos said that the film, “Manhattan,” has been a developing idea of the three friends ­– all “huge” Woody Allen fans – since their K-State days.

“We just joked, back when we were in school, that we should some day make a movie called ‘Manhattan,’ and set it here,” he said.

This version of “Manhattan” tells the tale of a New York writer, Miles Alder. Alder, after having the worst day imaginable, decides to press the “reset” button on his life and go back to the last place he was truly happy – Manhattan, Kan. During his reinvention, Miles connects with both old and new players of his life, all pushing him in the direction of finishing his novel.

According to Stavropoulos, the idea remained a joke between the trio until they began collaborating artistically a few years ago. Stavropoulos, who actually lives in Manhattan, N.Y., began to create video shorts and a web series in his spare time with Bruce and Palmer, who reside in Kansas City, Kan. and own the photography studio, Element 35.

“It was cathartic for us in a way, to make a movie about a place where we forged our friendships,” he said.

“Manhattan” was written, produced, financed, and filmed in its entirety by the three friends. In addition, each had a role to play in front of the camera. Stavropoulos took on the protagonist, Miles; Palmer brought to life Miles’ long time friend and womanizer, Jack Taylor; and Bruce, as Art, had a cameo as Miles’ and Jack’s rival for love.

While wearing their many hats in the film, the three were steadfast in their decision to take on the financial responsibilities rather than resorting to fundraising sites, like Kickstarter. The result was a cast that rounded out to a total of 48 actors, 33 of which are current or alumni K-Staters, who all donated their time to help make the dream a reality. Both Bruce and Stavropoulos said this was due to the K-State theatre department’s support for their students and fostering an environment of collaboration.

“We all still seek refuge with each other, personally and professionally, we are still creatively plugged in with each other,” Stavropoulos said. “It was nice to give the students that are here now an opportunity that I wish I could have had.”

The opportunity would not have happened without the support of the city of Manhattan and the K-State campus. Everywhere they scouted in Manhattan as a filming location opened their doors and welcomed the crew in. Bruce said that the locations – including Varney’s Book Store, Rock-a-Belly Deli and the Beach Museum of Art – were a big reason why they were able to make the film.

“We were strategic about crafting the film around the idea that [we knew people],” Bruce said. “We would write stuff and we would craft the movie with the idea that, ‘We’re going to have a scene at Rock-a-Belly.’”

Last Fake Patty’s Day, Varney’s even opened up their rooftop so Palmer and Bruce could shoot scenes for Miles’ dream sequence. Bruce said they had wanted a “uniquely Manhattan” event.

“It was raining, and we were standing there trying to figure out how we were going to shoot this thing,” Bruce said. “The owner of Varney’s then walked out and said, ‘Hey, do you want to get up on the roof? We’re closing up, just don’t steal anything.’ He then hands us the keys to Varney’s, tells us to lock up and text him when we were done. I had never met the guy before. We shot that scene six months ago. So there’s this incredible scene where you get the perspective of the entire Fake Patty’s Day crowd from the roof of Varney’s, which is the centerpiece of Aggieville, which is the centerpiece of this campus. All because an awesome guy liked the trailer.”

According to Stavropoulos, that welcoming attitude was a common experience that completely countered the attitude of Manhattan, N.Y., where one has to go through a costly permit process just to film on the sidewalk.

“Every single person, every single location in the film, just opened their doors to us like you would expect Manhattan hospitality to do,” Stavropoulos said. “It just reaffirmed that this was the right movie to make. It reaffirmed my love for the city.”

Joe Falter, senior in public relations, and Brenna Ford, senior in communication studies, both said post-screening that they loved how the film incorporated its namesake throughout Miles’ journey.

“It was really fun for me to not only follow along with the story line but also get to see places and people that I could immediately relate to,” Falter said. “There was a fantastic montage of the character’s process where it was really fun to see different scenes from Manhattan where he would go to get [to the end].”

This was the reaction that Stavropoulos said he was hoping for, especially as the submission of the film to film festivals in the coming year will prevent it from being viewed by the general public for at least that long.

“Bottom line, it’s just an amazing feeling as an artist to have been a part of creating something people actually care about and want to watch,” he said. “I cannot quantify, or even begin to describe how that feels. I can’t even put it into words what it feels like that we started from three guys with a story to tell. It’s a story we’re very passionate about, made with so much love and care with people that we’re passionate about in a place that we’re passionate about. It’s about a place that you love. I hope people feel that.”