Home Culture Feature The Nintendo Wii U has come, packaged with Legend of Zelda

The price of the Nintendo Wii U has finally dropped from $350 to a flat $300. At the same time, it is bundled with “The Legend of Zelda: The Wind Waker HD.” At a reasonable price, the question becomes whether one gets a Wii U with the latest installment of Zelda or not.

The big question I have for every console is whether or not it’s actually different than its predecessor. You don’t want to shell out your money for a repackaged piece of technology. With the Wii U you don’t get that. Instead of using a Wiimote and having to fling your arm through menus, simply enter the Wii U GamePad. It has a stylus that allows one to go through the menu on the GamePad.

As an interface, the Wii U just beats the Wii hands down. I was all for motion controls, except when using them for menus.

The Wii U looses some ground with the virtual console, though. With the Wii, a person could use GameCube controllers for the multiplayer games. However, with the new console, you can’t use them any more. Now, all people will have are the Wiimotes and the new GamePad. The good news is that the Wii Classic controller still works with the Wiimote. However, if you want to play first player games without the Gamepad, you’re going to need the Wii U Pro Controller.

Along with the Virtual Console, one can set up the Wii U so that you don’t always have to have the system on to finish downloading your games. With the Xbox 360, downloading the Xbox Live Arcade games required the system to stay on. The Wii U has a function that allows you to download while it is turned off, as well as perform system updates. The Nintendo Wii U still can’t play CDs or DVDs.

This down time setting helps relieve my apprehension over the virtual console games, especially with the menu set up. On the Xbox 360, after you pay, the download progress bar pops up on the screen. On the Wii U, using eShop, after you’ve made your selection, you pay, it dings and you think you’re done. You’ve paid, and you’re back on the search titles page. But, if you were to go directly to your home menu, your game won’t be there. You have to find the Download Progress app in your channels to find it. The ability to turn it off and have it chug away at downloading really helps with the difficulty to navigate the operating system on the new device.

As for gameplay, the Wii U GamePad does what I’ve always wanted in any gaming system. In games other than “The Legend of Zelda: The Wind Waker HD,” one would have to hit pause to set up your items, then unpause the game to use them. While you can do that with Wind Waker HD, you don’t have to. You can access your items from the GamePad screen and use them in the game, in real time. I have never liked the idea of being in a tense battle for the fate of the universe only to take a timeout. This way, the actions are more fast-paced, and you have more time playing the game.

It also removes clutter from the screen as you can have all the user interfaces run through the GamePad.

This is just one of the technical changes to “The Legend of Zelda: The Wind Waker HD.” Actual gameplay changes include a slightly different tutorial due to the new hardware, and my most hated of all changes to the game – the Swift Sail.

The Swift Sail doubles the speed of your boat and ruins the dynamic the original had for sailing the high seas. You can hear it sometimes during trips across the ocean in the game. You leave an island, the sweeping epic adventure music kicks in and then stops because you’ve just reached another island. People have complained about long travel times citing it takes 45 minutes to traverse the entire map. I counter that by saying nowhere in any of the sidequests or missions do you have to make that trip. The boat was fine the way it was. Luckily, the fun killing Sail is optional.

Patrick White is a senior in mass communications. Please send all comments to edge@kstatecollegian.com.

“Resogun” keeps you coming back for more on PlayStation 4 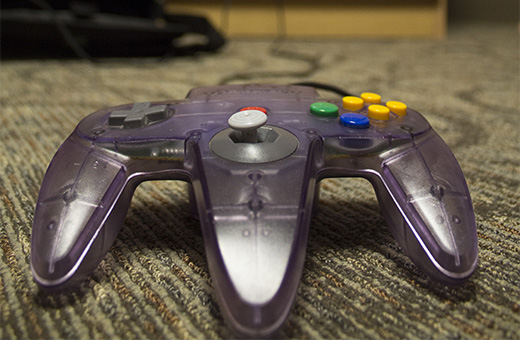