Home Culture Feature FIFA 14 executes a brilliant formula making it the top of its...

This year’s installment of “FIFA Soccer” brings a new set of challenges for EA Sports and EA Canada. In past years, the series has depended on substantial added features to reach the success that it has found, both overseas and stateside.

“FIFA 14” differs from previous versions by presenting subtle and precise changes that give the impression that EA Sports has finally nailed down the identity of the series. Whatever it may be, “FIFA 14” executes and polishes an already brilliant formula, solidifying the series at the top of the league.

“FIFA 14” is subtle in comparison to its predecessor, and it can initially be difficult to tell the two apart. However, you’ll quickly learn that these minor tweaks and fixes have fully crafted and evolved the game play formula through what I like to call “ah-ha moments.”

The facilitator behind many of these moments is the drastic improvement to teammate intelligence. No longer do you feel the need to “baby” your team, or put them all on your back to see through to a victory. Your squad is now fully capable of providing support on both sides of the ball.

On the attack, fellow forwards and midfielders will adjust their runs to set up alleys for goal-scoring opportunities, while defensively, your computer controlled defenders will spot opportunities to jump in and win possession. The result here is a significant boost to the pace of the game, warranting more opportunities to score.

This game offers a tempo that’s much more desirable for gameplay. With more, it seems, happening on screen, it is a joy to see that EA Sports has held true to recapturing the action in its entirety. It is one thing to advance the computer intelligence, but it is another to recreate it in stunning animation. The realism in things like volleys, slide tackles and dribbling is second to none, showing the level of focus and care in presentation.

On the contrary, with so much attention to detail, it’s disappointing that EA Sports has failed to put as much love into the look of the game. “FIFA 14” isn’t an ugly game by any means. It’s just clear that the series is desperately needing, and anticipating, the technological advancements that are coming with the next generation of consoles, as the current generation version is plagued by subpar backdrops and on-field layouts.

Similarly, there’s a glaring difference in the makeup of world class players and those that are lesser known. For instance, stars like Lionel Messi and Cristiano Ronaldo look absolutely stellar, while the middle-of-the-road “footballers” look mediocre at best.

The same issue is found in the sheer number of stadiums, as well. The few that are boxed in with the game are fantastic, but there in lies the issue: the few that are boxed in. It would seem like a big budget game like “FIFA 14” could accurately depict all 600 of the club’s stadiums that are in the game or at least those in leagues recognized around the world, but this just isn’t the case. As an American soccer fan, this can be disheartening when world-renowned stadiums like Sporting Park in Kansas City, Kan. aren’t included.

Where there are few, though, “FIFA 14” offers more somewhere else. This is the case with the sheer amount of modes and mini games to play. You can battle your friends offline or take on a random user from across the globe online. Want to control a team as a head coach and balance contracts and scouts? That’s available. Maybe you just want to fine tune your crossing skills without the annoyance of an opponent? You can do that with a number of fun, and surprisingly addictive, mini games.

In both the gripes and praises of “FIFA 14,” you can see just how far EA Sports and the “FIFA Soccer” franchise have come over recent years. “FIFA 14” is a testament to the past, and a promise of the future. It’s arguably the best installment of the series, which, without the flash and glamor of past games, is an achievement in itself. Without a doubt, “FIFA 14” is at the top of its league and is every bit deserving of a four out of five star rating. 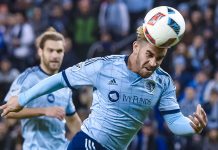 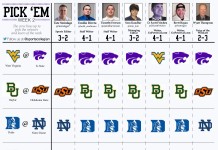