After releasing the game originally in 2010 to widespread, negative critical reception, “Final Fantasy XIV” was pulled offline by developer Square Enix. They didn’t want the game’s terrible quality besmirching the “Final Fantasy” brand. Now, three years later, with new direction and lots of polishing, that same game has been relaunched under the moniker “Final Fantasy XIV: A Realm Reborn.”

What a fitting name.

Upon logging in for the first time, it’s apparent just how much care has been put into “Final Fantasy XIV.” Character creation is deep. I spent a few hours fiddling around with the character creator alone. After making my character and picking a starting class, I was whisked away to my starting city, which is determined by your class. I then proceeded to begin making a name for myself in the world of Eorzea, the fictional continent the game takes place on.

Eorzea is a stunningly beautiful place. I have yet to go to an area that isn’t drop dead gorgeous. From the lighting, color palette and animations, “Final Fantasy” is a visual treat to behold.

Accompanying the astounding visual design is one of the most incredible soundtracks I’ve had the fortune to listen to. With a score that ranges from sweepingly epic to cheerful and warm, I have yet to grow tired of it after hours of listening. It breathes even more life into the already lush and beautiful world of “Final Fantasy.” This is hands-down the best looking and sounding massively multiplayer, online role playing game, MMORPG, I’ve ever played.

The beautiful world and soundtrack are important for “Final Fantasy” because of the game’s slow start. They were enough to keep me invested as I slogged through the first hour or two of the game. It’s plagued by the same boring quest design that’s in practically every MMORPG to date. Go here and kill five of these. Go over there, pick some flowers. Go deliver this message. Thankfully, “Final Fantasy” keeps the required amount of stuff to kill and collect to a minimum. On top of the mediocre quest design, early combat feels slow and lacks depth. However, after that initial hour or two, the game world opens up, and with it, the Job system, or advanced classes in the online society.

If “Final Fantasy” does one thing innovative, it’s their job system. Any player, regardless of starting class or race, can become any other class including high classes. You could start out as a heavily armored axe wielder and end up a magical healer. This system adds depth and tactical flexibility to the game.

As you take on different classes, you can mix and match skills between them, and unlock more powerful subclasses that have their own unique abilities and roles. It’s also a boon for people that simply get bored of playing one class all the time. Each class levels up individually, so when you’re tired of one, another is available at the click of a button with it’s own gear and skill set, as well as play style. Even crafting and gathering have their own classes dedicated to them. Most MMORPGs turn these things into side activities, where “Final Fantasy” makes them feel in depth and fleshed out.

All of the above wouldn’t matter one bit if the combat wasn’t good. Fortunately, that isn’t the case. Once you’ve unlocked more skills, the combat starts to take shape, becoming more deep and requiring more thought as the player gets stronger. The game slowly introduces mechanics to you through a brilliant tutorial disguised as quests known as Guildhests. These teach you how to play your class, without feeling like information is getting shoved in your face.

Also worth mentioning is the FATE system. These are random events that occur throughout the world, giving rewards when they’re completed.

The game’s story and writing wraps all of this up in a neat little package. It’s pretty good, even if it borders are melodramatic. Quests and FATES names are peppered with pop culture references that got a chuckle out of me on a few occasions. Cutscenes are good, and the voice acting suffices, though I would’ve liked to see more of both. All in all, it feels like “Final Fantasy” despite it’s MMORPG trappings.

Due to it’s MMORPG nature, I didn’t have time to see everything “Final Fantasy” had to offer. There’s simply too much content to experience in the time needed to write a timely review.

“Final Fantasy XIV: A Realm Reborn” doesn’t break new ground for MMORPGs. It takes an existing formula and perfects it. It’s beautiful, fun and addicting, and I’m looking forward to spending countless more hours in Eorzea. I’ll give a strong five out of five stars for this game.

Collin Weaver is a freshman in journalism and mass communication. Please send all comments to edge@kstatecollegian.com. 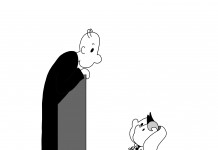 OPINION: Is getting married early a good idea?

OPINION: A gender-neutral pronoun would be helpful, but is it possible?

OPINION: Is getting married early a good idea?