Currently stationed at Fort Riley and assigned to the 4th Infantry Brigade Combat Team, 1st Lt. Christopher Nagy recently had the opportunity to play with the K-State Orchestra in concert on Tuesday, Sept. 17.

Nagy first started playing the cello at 11 years old. Just a year later he switched to the double bass and has stuck with it ever since. Nagy was a music major at the University of Southern California and received a master’s degree in music education.

In October 2010, after spending some time teaching post-graduation, Nagy enlisted in the U.S. Army. Two years later, in May 2012, he was deployed to Afghanistan.

“I always wanted to serve my country,” Nagy said. “I just didn’t act on it until after college.”

During his time in the army, Nagy said he decided not to enlist in the military band. He wanted to get a different experience through the military than the experiences he received through music.

“I can always play music on my own,” he said.

However, Nagy admitted that it was a little difficult to get back into the swing of the music.

“It was like riding a bike, a little rusty, but I got back into it,” Nagy said.

Nagy said he was excited to get to play with the K-State Orchestra to have people to play with again, because playing with people is what makes music fun.

“Playing with the orchestra was a great experience to be able to get back into it,” he said. Having been so involved in the army the past three years and having spent nine months in Afghanistan, his playing time had been very limited.

David Littrell, the K-State Orchestra conductor, said it was also beneficial for his students.

“It was a good experience to have a mature, experienced performer playing with the students,” he said.

Nagy’s experience on the double bass allowed him to help students in that section, offering them advice along the way on how to better their playing.

Ranie Wahlmeier, sophomore in music education and member of the double bass section, said that it was a cool experience to get to play with someone so accomplished.

“He’s really helpful,” Wahlmeier said. “If we don’t know what to do, he always knows what to do.”

Littrell said he was pleased with the orchestra’s performance on Sept. 17, seeing as they had only had three weeks of rehearsal and were performing difficult music.

“They pulled it off,” Dr. Littrell said.

Nagy still rehearses with the orchestra on Monday nights and will be performing in the concert on Oct. 22 in McCain auditorium at 7:30 p.m. 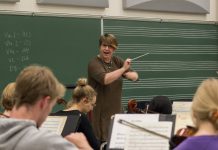 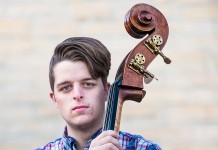