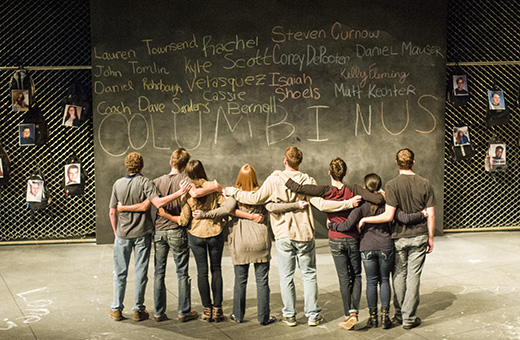 Starting tonight the K-State Theatre Department will open its 2013-14 season with “columbinus,” a play that portrays a fictional account of the mass shooting that occurred at Columbine High School nearly 14 years ago.

The performance will show at 7:30 p.m. Oct. 10-12 and 17-19 and 2:30 p.m. Oct. 20 in Mark A. Chapman Theatre, formerly known as Nichols Theatre. Written by P.J. Paparelli and Stephen Karam, the play is based on the events that took place when students Eric Harris and Dylan Klebold opened fire in Columbine High School in Columbine, Colo., killing 13 and injuring 21 more before ultimately taking their own lives.

“This is a piece of theatre
that you don’t often see at K-State,” said Hannah Miller, junior in theatre performance and a “columbinus” cast member. “It holds social relevance and it
is easy to identify with, especially to students who were in high school not
all that long ago.”

The process of selecting “columbinus” began in December 2012, when K-State’s theatre faculty was crafting together the 2013-14 season play list.

“On Dec. 14, the Sandy Hook
Elementary School Shooting in Newtown, Conn. occurred,” said Jennifer Vellenga, assistant professor of theatre and director of the play. “I immediately started
searching for a play on school shootings.”

Vellenga said that very quickly she found “columbinus,” which had received excellent feedback following its 2008 premiere in Chicago.

“I was very moved by the
play when I read it,” Vellenga said. “I
thought stylistically it was very creative and something I would enjoy
directing.”

However, there was hesitation to bring “columbinus” to the K-State campus. Vellenga said she was unsure as to whether or not the the play would be well attended or if it would have a strong appeal to a college-aged audience. The production was close to being abandoned when Vellenga took the idea to her spring 2013 Fundamentals of Acting class, which consists solely of non-theatre majors.

“I asked if they had any interest in seeing a play like this,” Vellenga said. “We had a lively conversation and they emphatically agreed we should do it. That conversation sealed the deal for me.”

Along with the costume and set designers, Vellenga spent the summer doing research for the play. Auditions were held during the first week of school.

“To me it seemed like the most meaningful show this season, and I knew I wanted to be involved in any way possible,” said Clay Massingill, freshman in theatre and “columbinus” cast member. “I auditioned thinking I would never get in, due to my lack of experience at K-State”

The audition process to set the cast was unique. Those auditioning were interviewed about their personal lives, and the actors who were selected to perform were slated in as characters that were based around themselves.

“The casting was based off of our personal stories about high school and who we were [and] are in real life,” Miller said. “Essentially, I am really playing myself being put in situations that I was in during my high school years.”

In addition to acting out fictitious scenes that mirror the events of the Columbine massacre, the performers will periodically step out of their characters and into narrating roles, relaying the events of the actual shooting to the audience.

Although they are not portrayed directly in “columbinus,” the actual events that took place during the tragedy had a heavy hand in the formation of the play. One such aspect is that journal entries, writings and interviews made up a large portion of both the script and multiple scenes throughout the play.

“The ‘columbinus’ script is written tastefully and with respect to the events that happened,” Miller said. “It is cautious in telling the story, but there are moments that may shake you in your seat. That’s the reality of it.”

Preparation for the roles took quite a toll on the performers, due to the dynamics and the powerful, emotionally exhausting content of the play. In order to combat some of the stress accompanying some of the scenes, the actors went through a “de-rolling” process, which helped them to shake the characters and the story before leaving rehearsals.

“Preparing for this play requires shifting major mental gears and lots of research, both of which are not pleasant,” Massingill said. “Slowly the story and the character creep into everyday life, you begin to make connections all around you.”

Despite some of the challenges that accompany performing in this production, the actors said they firmly believe in the overall message and purpose of the play.

“I had never seen any thing like it on stage before,” Massingill said. “The performance will be unsettling, but it’s not something we can just lock away. In the shortest sense, ‘columbinus’ is a story worth hearing.” 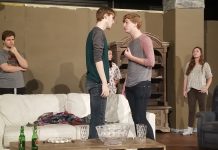 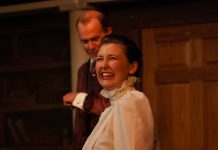