Last night was a good night for jazz music at K-State.

Amidst their current fall tour, critically acclaimed contemporary jazz trio ACS played a 90 minute concert in McCain Auditorium, providing a uniquely sophisticated blend of several different styles of jazz, along with some elements of funk and pop.

ACS, which is an acronym for Allen, Carrington and Spalding, is composed of three members: Geri Allen, pianist, Terri Lyne Carrington, drummer, and Esperanza Spalding, bassist and vocalist. All three women are critically acclaimed musicians and are highly respected in the current contemporary jazz scene. Spalding also won a Grammy Award for “Best New Artist” in 2011.

“ACS consists of some the brightest and best jazz musicians on the jazz scene today,” Todd Holmberg, executive director of McCain, said. “[They are] on the cutting edge of pushing the boundaries of contemporary jazz.”

As executive director, Holmberg’s job includes spending a great deal of time developing relationships with managers of artists and directors of other performing arts centers. He said this hard work ensures that Manhattan is on the radar of the world’s top performers and artist agencies. Such was the case in attracting ACS to come perform in Manhattan.

“My hope is that their creativity will be inspiring to those in the audience, causing them to think more creatively about their own pursuits in life,” said Holmberg.

ACS attracted a crowd to the auditorium. The three musicians walked on stage to applause from a lively and enthusiastic audience.

“I have seen Esperanza Spalding on TV a couple of times, and I have been listening to Geri Allen’s music for a couple of years,” Katy Karlin, associate professor of creative writing, said. “I was really excited that they were coming to Manhattan.”

The trio’s setup was simple. Allen played on a Steinway piano on the left, with her back to the audience. Spalding was stationed in the middle, playing classical bass and providing occasional vocals. On the right, Carrington was set up with a somewhat expansive Yamaha drum set.

ACS quickly set the tone for the evening. As soon as they walked on stage, Spalding, who, in a stylish fedora and a light brown blazer, led the direction and movement of the pieces for most of the evening, immediately launched into a rousing bass line, her hands flying up and down the neck of her instrument. Allen and Carrington immediately followed suit and pretty soon, the three musicians were a force, combining their different styles into a blend of ambitious contemporary jazz and inspiring much toe tapping from every row in the audience.

Improvisation and good communication were strengths of each musician. Often, throughout the performance, instead of watching their instruments or looking out at the audience, the three were watching each other, nonverbally communicating instruction throughout every piece. This communication allowed them to improvise and embellish the structure of each song, and, in the truest sense of jazz music, add a little bit of pizazz to the night. At one point, Carrington grabbed a pair of mallets and jumped into a rousing five-minute drum solo. This performance was followed up by Spalding, who tore through a charged bass solo of her own. Afterwards, the three seamlessly transitioned into their next piece.

“I [was] looking forward to wide variety of composition,” John Seitz, junior in life science and trombonist in K-State jazz band, said. “I was looking forward to seeing some accomplished musicians cover a number of different genres, exploring styles that extended beyond just jazz.”

Musical diversity was abundantly present throughout the performance. Each musician contributed to the ranges of style and sound in the music. Carrington experimented with different types of beats on the drum set, switching back and forth between jazz and standard grips on her drum sticks and alternating between drum rolls on the toms and snare drum and beats that involved any of three of her ride cymbals, as well as her hi-hat cymbal. Allen provided a number of different accompaniments, ranging from rhythmic chord progressions to bluesy melodies up and down the higher octaves of piano. Spalding incorporated different elements of plucked and bowed bass, showing stylistic roots of classical, jazz and funk music through her contribution to the music. Additionally, she provided vocals for a couple of the pieces, singing in a soprano register with a somber and husky tone that provided an ethereal quality to the collective sound.

After about 75 minutes, the trio left the stage, returning a few moments later for a one-song encore. For their last piece, they chose to perform a lively rendition of “All of You,” a song written by famed American composer Cole Porter. At the end of the night, ACS left the stage to a standing ovation, having delivered a unique, rich and capturing performance. 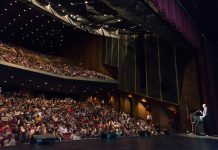