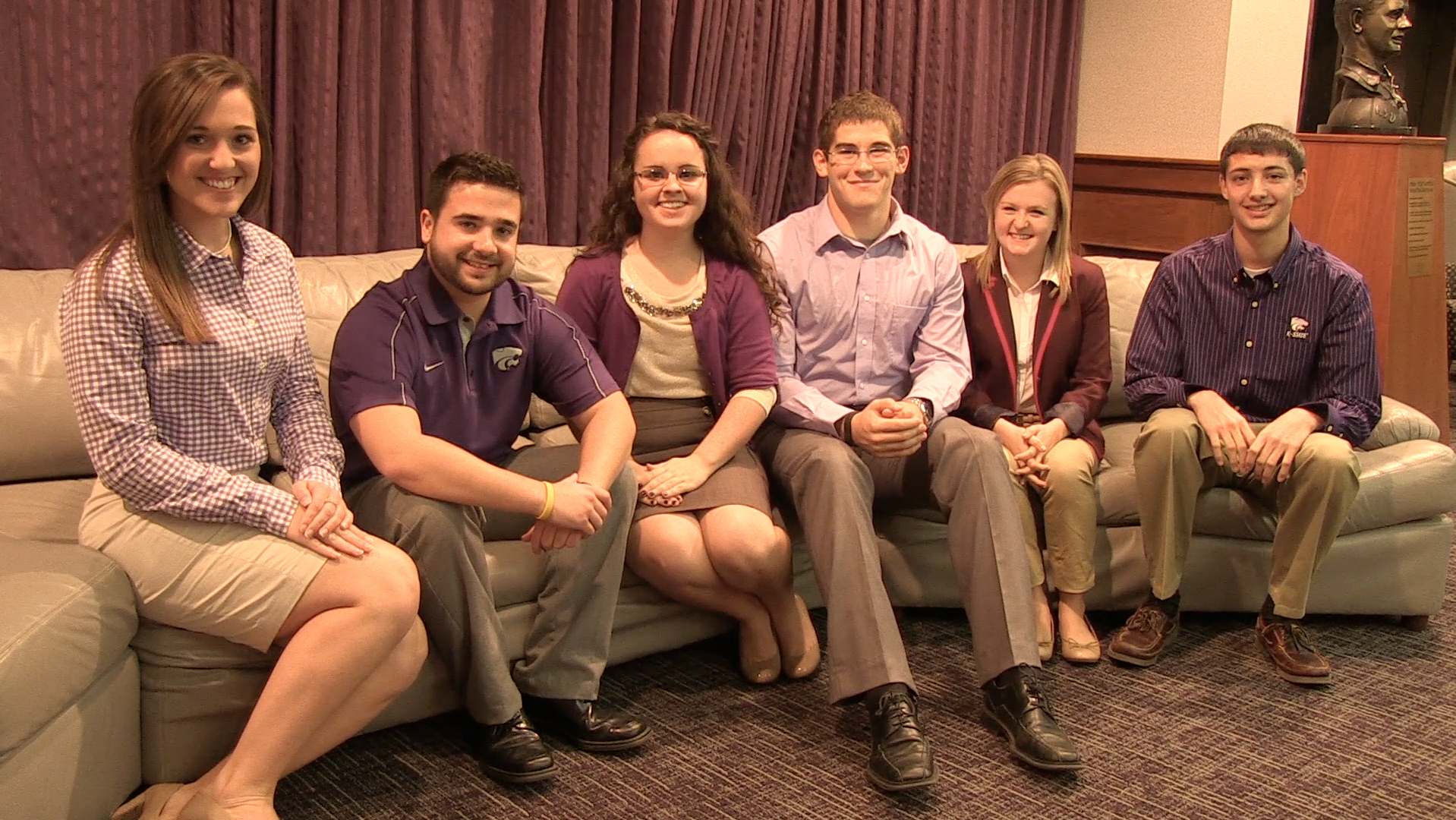 From 8 a.m. to 5 p.m., the online polls will open to vote for the 2014 K-State Student Ambassadors. Although voting for the new ambassadors begins today, many students haven’t heard much about the candidates or what makes them qualified for the job.

The ambassador program, sponsored by the Alumni Association, allows a direct line of communication between alumni, prospective students and current students. Ambassador candidates must be current students and make it through two rounds of interviews in order to proceed. After the first interview in front of a student panel, six men and six women are selected to move through the process. After the second interview, the three men and three women finalists are announced.

Gavin Hargrave, associate director of alumni programs and adviser for the ambassador program, said the program is a way for students to get involved with the Alumni Association.

Hargrave said the process involves an emphasis on public speaking and being in front of people as the ambassadors will have a presence at alumni events, where it is important to communicate the friendly atmosphere of K-State.

“We feel there needs to be a student presence,” Hargrave said. “They are who we call on.”

In an email interview, Lockwood said the ambassador program is unlike any other student organization because they reach people across the country.

“This program is unique to K-State and it speaks to our universities focus on students,” Lockwood said. “Ambassadors have the chance to bring Manhattan to people who might not otherwise have the chance to visit our slice of happiness.”

Lockwood also said that if elected as an ambassador, he would have the opportunity to grow closer to other K-State students.

“As an ambassador, I would attend events where students will be in attendance or be the focus allowing me the opportunity to get to know more students on a deeper level,” Lockwood said.

Berndt said in an email interview that being an ambassador candidate will always keep him involved with K-State on a deeper level, whether he is elected or not.

“These experiences have helped me gain the skills, knowledge and confidence to be an Ambassador candidate and are what will keep me striving to help our university, no matter the outcome of this election,” Berndt said.

Berndt said the student ambassadors have a unique purpose because they are present to show people outside of the university just what makes K-State so special.

“When someone has a question about what the K-State family actually means, we’re there to convince them that it’s not just talk,” Berndt said. “We get the wonderful opportunity to represent each and every one of you, and that’s not something that you’ll see almost anywhere else in the nation.”

Agreeing with Berndt, Knight said in an email that the ambassadors should represent K-State strongly with a passion with everyone they meet.

“I think if the ambassador can charismatically leave a strong and meaningful impression on the people they interact with, then K-State will be represented in the absolute best way possible,” Knight said.

Knight said the focus should be connecting the K-State “family” through the ambassadors, because each member brings something new to the table.

“I feel like no matter who you are or what you are doing here, each and every person brings in a different unique dynamic to the K-State family that needs to be shown,” Knight said.

Petite said in an email that the process has strengthened her ability to be involved on campus.

“This process is definitely one of the toughest I’ve been through but every second has been 100 percent worth it because I am being given the opportunity to meet even more fantastic K-Staters while sharing what it is I love most about our university,” Petite said.

Petite also said the ambassador program gives students the opportunity to learn about K-State, no matter what stage of life they are in.

“The Ambassador program is the perfect way to reach out to Wildcats at every stage of their life,” Petite said. “Through their direct contact with prospective students, current students and alumni, the program gives K-State an opportunity to create relationships before a student reaches campus, while they are here and after they’ve left.”

Although the program gives a glimpse of K-State, Clark said in an email she thinks the program allows people to see the things that they can’t see or feel without being on the campus.

“The
job of the student ambassador is to represent the intangibles of the
K-State experience, the things you can’t put inside a pamphlet
or on a PowerPoint, to prospective students and alumni,” Clark said. “This
allows them to get an inside look at what student life at K-State is
like and to understand how unique our university really is.“

Agreeing with Petite and Clark, Harner said in an email interview that the program drives the direct connection between between alumni, prospective students, and currently enrolled students.

“I believe that the ambassador program enhances K-State because it serves as a direct link between prospective students and alumni, and the current students,” Harner said. “The K-State student ambassadors serve as representatives for the university and help to further perpetuate the family atmosphere that is so deeply valued here.”

Jordan Priddle, graduate student in counseling and student development and 2013 K-State Student Ambassador, said the ambassador program allowed her to constantly communicate with people about K-State and life in general. Priddle said the program allowed her to network with alumni in all parts of the country, and it was an important skill that was found through being an ambassador.

“Being an ambassador, you really get to be connected to alumni across the entire nation,” Priddle said. “I think I just learned how important that skill is.”

The 2014 K-State Student Ambassadors will be announced this Saturday during halftime of the football game against West Virginia.