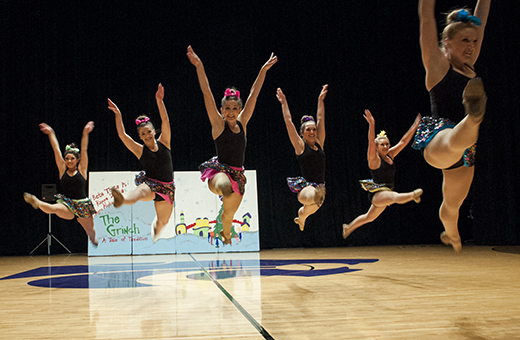 Wednesday night, Bramlage Coliseum hosted Wildcat
Request Live, a greek dance competition where 12 sorority and fraternity group
pairings competed against each other as part of the All-University Homecoming
festivities.

The night began with performances from the K-State cheerleading and Classy Cat squads. The K-State Men’s Basketball team and Willie the Wildcat also made appearances at WRL.

“WRL is very time consuming with practices every other night, but it helps you meet people you didn’t know before,” said Trayl Chaffee, member of Sigma Chi fraternity and sophomore in public relations. “I did it last year, and dancing in front of the greek community is a great experience.“

According to Chaffee, his pairing of Gamma Phi Beta, FarmHouse, and Zeta Phi Beta started practicing a month ago and met up about four times a week to rehearse their dance.

All the competing groups’ themes revolved around this year’s homecoming theme: “A Tale of Tradition,” with “Wizard of Oz” being the most popular group theme. All groups had to create their own choreography and background music. Twirling cowboys, dancing astronauts, a pirouetting Dorothy and even a vivacious Grinch were included in some of the dances. Famous K-State figures were also incorporated in the dances, such as Bill Snyder and Willie.

All competing pairings performed in front of a crowd that filled half of the seats in Bramlage and a panel of judges. All judges were K-State staff members.

“This is my eighth year watching WRL,” said John Lantz, a coordinator of new student serves and WRL judge. “I was a Kansas State student, so I have seen past performances. I expect well-choreographed dances with some good costumes, some good moves, and a little bit of a wow factor.“

As the groups performed, different genres of music played. Each of the competing groups’ background music followed a storyline that helped them communicate their homecoming theme to the audience.

“I think WRL is a great competition for homecoming, it gets to show of peoples’ talents and you see all the hard work people put into it,” said Maura Schmidling, junior in animal sciences and member of the Gamma Phi Beta sorority. “It shows our K-State spirit, and the students’ dedication of making something look good out of nothing.”

The winner of WRL will be announced Friday during the Homecoming Parade along with the 2013 overall homecoming winner.