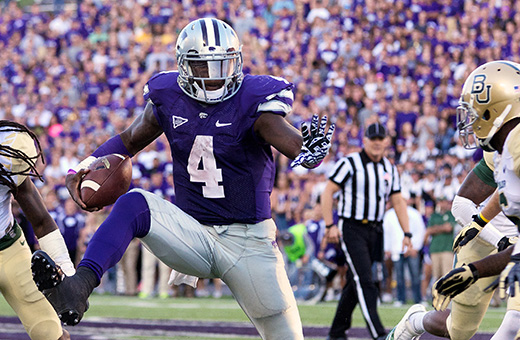 After a disappointing 0-3 start in Big 12 play, the K-State Wildcats are coming off a bye week and are set to face the West Virginia Mountaineers, who are 1-2 in conference play.

K-State head coach Bill Snyder believes the bye week helped his team move on from a tough start to the season.

“I think that once they got away from the loss, tried to get focused on correcting the issues that we have, and get focused on West Virginia,” Snyder said. “I think they were in the moment, which is important to not let it linger with you and work diligently in your preparation and improvement. I think they have attempted to do that.”

The Wildcats are coming off a 35-25 loss to the undefeated Baylor Bears two weeks ago. Quarterback Daniel Sams was the star of the game as he racked up 199 rushing yards and 41 more through the air.

“He allowed us to move the football and be more effective with our offense, but we still had some correctable miscues,” Snyder said. “The ballgame boiled down to us giving up four big plays on defense and two critical penalties on defense that equated to 21 points. That had a major impact on the outcome of the ballgame.”

Despite losing the game, Snyder still said he saw noticeable improvement in a team that fell to an FCS opponent in Week 1. Of all of the units, the Wildcats head coach said the offensive line has taken the biggest leap.

“We are trying to get ourselves better, and in some cases we have,” Snyder said. “In terms of our last ballgame, we have improved play with our offensive line. I think that was evident to most people. I thought our quarterback play — even though we had some problems, as did our offensive line — was improved collectively.”

The Wildcat rushing attack and offensive line will play a huge role in their game against the Mountaineers, who rank 96th in the country in rush defense with 196.0 rushing yards surrendered per game.

That means senior running back John Hubert, who rushed for 90 yards against Baylor, should see an increase in touches on Saturday. Snyder said he believes his Hubert has shown steady improvement as the season has progressed.

“I think that John has been practicing better, and consequently it has helped improve his play,” Snyder said. “He still has a ways to go to get back to what his capabilities are, but I was pleased with the progress that he made.”

West Virginia is in a bit of a rebuilding year after losing star quarterback Geno Smith and his top two receivers from last year’s team to the NFL. Quarterback Clint Trickett, a transfer from Florida State, is expected to start for the Mountaineers on Saturday.

Snyder, however, said that he and the Wildcats will take a similar approach to preparing for this year;s Mountaineers squad.

“I do not see a substantial amount of differences,” Snyder said. “They do not have the [Tavon] Austin youngster quite obviously, or Geno Smith, but the other young guys play well. I do not think they are aborting their system because of personnel. I think they have good schemes on both sides of the ball, and I just think they are trying to get new guys and young guys that have not worked together to fit into the system.”

The fact of the matter for K-State now though, is that in order for the Wildcats to make a bowl game, they must win four of their remaining six games. That has weighed on the mind of sophomore wide receiver Kyle Klein.

“It has been on the team’s mind because we do have to win four of the next six games to see a bowl game,” Klein said. “That is something that we obviously all want to do. I think the rally cry is just getting better. Every week we have gotten a little bit better and made improvements, so I think as a team we are really close to getting traction and moving forward. Hopefully after the bye week we will be able to start back strong against West Virginia and gain momentum for the second half of the season.”

K-State is obviously not where they want to be at 2-4. But Saturday’s game is the start of the second half of the season, and could prove to be a fresh start for the Wildcats.

“Being 2-4 is never easy and neither is the response to it,” Snyder said. “How you respond to it and how you feel about it is difficult for the players, coaches and the people that are invested in this program. The important thing for us is not what could have been, but what are we going to do.”