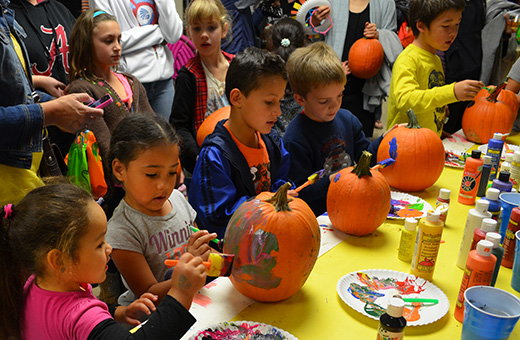 Starting in summer, the UPC community committee started brainstorming for the kid’s carnival and had already planned for about 200 kids. Then, after the homecoming theme was announced, the committee started to plan events, order food and supplies to put their ideas to life.

Alexis Turner, sophomore in marketing and co-chair for UPC’s community committee, said she loves seeing all of the families participate.

“It’s just fun for the parents to be able to come out and experience that with their kids,” Turner said. “Something besides just trick-or-treating for Halloween.”

The homecoming pairings of sororities, fraternities and other organizations filled the first floor with activities of their own that included various bag tosses, face painting, pictures with themed props and painted backdrops, crafts, puppets and coloring.

Each pairing had a different theme that related to their other homecoming events, like “Wizard of Oz” and “Back Into the Future.” Megan McCoy, sophomore in elementary education, said she liked the event and how fun it was for the kids.

“It’s fun to interact with the kids on a first-hand basis, showing them how use the golf ball and golf club,” McCoy said. “Seeing them kind of figure out how to do it themselves.”

Kids of various ages showed up some excited to play all of the different games but most were more excited about what candy or prize that they could win. A young boy was running up the stairs calling out “I don’t care about the game, I just want the candy!”

Scott Finkeldei, K-State alumnus, was there for a third year with his son Maxwell, who is 3 years old, was dressed as Buzz Lightyear. Finkeldei remembered being a Phi Gamma Delta at K-State and participating in all of the homecoming events.

“I think it’s great for the community,” Finkeldei said. “This is an opportunity for people who may not come on the K-State campus often. It’s also great to interact with the greek organizations because a lot of people don’t get a chance to cross paths with them very much.”

Maxwell said he loved getting to play all of the games but most importantly get his favorite candy for prizes, suckers. Even more than that, he said he loved his costume, as did a lot of other people participating in the event. He took his wings and acted in true Buzz Lightyear form, “flying” around saying, “To infinity and beyond.”

The kid’s carnival is an event that has been included for several years during the week of homecoming and gives Manhattan families a chance to participate in the big week at K-State. 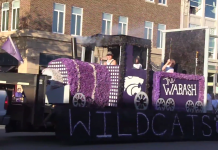 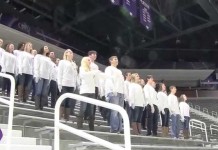 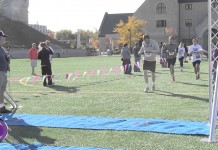