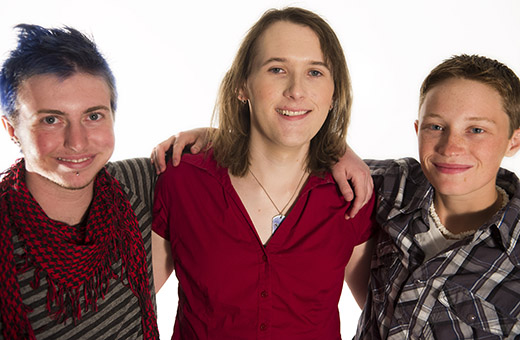 Editor’s note: This is part three of a three part series sharing the stories of transitioning transgender students and their current stage of transition and where they are in their lives today.

As people grow through different stages of their lives, they must continue to see and accept the change they are going through. For three current K-State students and one recent alumna, the change they saw was one they chose.

These four transgender K-Staters all went through different phases of discovering who they are now. Before these people transitioned, they lived cisgender lives. Cisgender is when the way you present yourself on the outside reflects the sex one was given at birth.

Will Harmon, junior in English, said he gets tired of people asking if this is just a phase for him or if he is just doing it for attention. Even though he had to live the beginning portion of his life as a woman, he knew this was who he was supposed to be from the beginning.

“In my head, I am a guy,” Harmon said. “Scientists have done this thing where your brain develops differently from the body in the womb. And there’s a male brain and a female brain. Some parts of the brain are larger than others. I am pretty certain I was born with a male brain. I don’t like the idea of being a girl. I don’t like being called a girl or young woman or have female pronouns used.”

According to an Oct. 6 article in the Guardian by Mo Castandi, “Another sexual variation is found in a structure called the third interstitial nucleus of the anterior hypothalamus. The function of this tiny structure is unknown, but research from four different laboratories has repeatedly found that it is almost twice as large in males than in females. It has also been linked to sexual orientation and gender identity. One study showed that it is more than twice as large in heterosexual males than in homosexual males, where it more closely resembles that of women; another found that it is smaller in male to female transsexuals and larger in female to male transsexuals.”

Harmon has been in transition for two years now but has yet to get onto testosterone, a male hormone. He is still awaiting the approval from his health insurance to be able to schedule appointments with a gender therapist and an endocrinologist. He still binds his chest with elastic compression garments to hide his breasts and smooth his hourglass shape.

Adam O’Brien, senior in fine arts, has been in in transition for nearly four years. He has been on testosterone for two of those years and still binds. O’Brien lives as a stealth transgender man. Stealth is when he does not need to disclose that he is transgender, which means he blends into the societal expectation for men. Now that he is stealth, he runs into the conflict of choosing to disclose his transgender status.

“Do I just want to go about living my life as I am and not disclosing this horrible idea of who I used to be?” O’Brien said. “Or do I disclose that I am transgender and have to discuss what it means and stuff like that?”

This can often be a conflict for transgender people. Taylor Suppes, sophomore in agricultural business, has yet to start hormones as well, but for different reasons than Harmon. For Suppes, it’s an internal conflict based on talking to other transgender men who have started testosterone.

“Getting on hormones affects other people much more dramatically than they can deal with,” Suppes said. “Once you start hormones, there isn’t a way back. You’re on that path and that’s what you’ve chosen. I struggle with whether or not that is a path I want for myself or not. I pass pretty well as it is, so why should I do that to myself?”

Suppes doesn’t know if he wants top surgery, the reduction and removal of all breast tissue, or to get on hormones first.

“I know I’m male, but I shouldn’t have to go through all of this stuff to be male,” Suppes said. “I feel like I should have been born male. I wish I didn’t have to deal with all of the drama that goes with it.”

Kara Baker, lab technician in plant pathology, has been on hormones for some time now. Unlike Harmon, O’Brien and Suppes though, Baker is a female to male transgender person. She has to take estrogen, a female hormone, and antiandrogen, a testosterone blocker.

Baker’s breasts will fill in by taking the estrogen. She has been working with laser technicians to get her facial hair removed.

Baker, Harmon and O’Brien have all legally changed their names. Suppes hasn’t. Now that Suppes has been referred to with masculine pronouns, he feels more comfortable staying with his gender neutral birth name, Taylor.

Transitioning for all four of these students was a unique experience. For any transgender person, they will experience something different from these four. Some transitions may be easier, some may be more difficult. Suppes said it’s hard to transition in a town when people aren’t out, especially when there doesn’t seem like there is a voice for the transgender community.

“Even if there was slight education in middle schools or high schools, it could save so many lives,” Suppes said. “If there was support, education or knowing of someone else out there like you, people wouldn’t have to go through this alone.”

“I want to be an educator that helps bring visibility to the trans-community,” O’Brien said. “It’s hard to find someone in your local community, there, who you can talk to face to face about something like being transgender. When I move to a bigger city, I want to be that person that a young trans-person can go to help guide them.”