In September, Netflix came home with big wins in three of the nine Primetime Emmy Awards it was nominated for. The big one was for David Fincher, who won best director for his Netflix original “House of Cards.” The other two, for best casting and best cinematography, went to “House of Cards” as well.

Even though they lost to “Breaking Bad” for Outstanding Drama Series, the fact that “House of Cards” and its cast of new faces won awards says a lot. It is a big milestone for not only the cast and crew, but for all of exclusive online streaming too.

When KTLA, a CW affiliate, spoke with the cast and crew after the Emmys, they all laughed together about how they did not know they qualified for these awards. This win seems to answer some questions while opening the door to others.

KTLA asked if it was appropriate for the Netflix original to compete against the other shows. There is a lot of howling around Netflix because it does not release viewership statistics, so it is not well-known how many people watch the show. Dan Weeks, sophomore in agricultural business, said it doesn’t matter.

“It’s all about the show being good,” Weeks said. “It is not about how many people watch it.”

In agreement with Weeks, Christian Kauffman, senior in architectural design, said popularity of a show or program shouldn’t define the quality.

“I don’t know if popularity is the right measure for the quality of plot,” Kauffman said. “If a show is developed well, popularity is something that comes with it. People want to watch good shows.”

In regards to budgets, Netflix is doing well with its model of less is more with shows like “House of Cards” and “Orange is the New Black.”

With Netflix’s success, Kauffman said he hopes that it will continue trending.

“With this achievement, I think Netflix will continue to go with originals or pick up shows that were cancelled despite big fan bases,” Kauffman said. “One I added to my queue recently was ‘Arrested Development.’ ‘Firefly,’ for example, is something they could bring back.”

Other people are hoping for a bigger platform and recognition of the medium.

“I think this is cool for the web series,” Patrick Hutfless, sophomore in computer science, said. “I watch ‘Red vs. Blue’ and other web series that no one takes seriously.”

“Red vs. Blue” is the comedic series, by Rooster Teeth, using the game franchise “Halo” as a make shift production studio that they add voice overs for. The show is currently showing season 11. There are other independent web series that, while at one point may have been overlooked, have received high praise in the rising popularity of online streaming.

“Freddie W just made a lot of money with “Video Game High School” and “Doctor Horrible’s Sing-a-long Blog,” a huge cult classic, [are both] now up on Netflix,” Hutfless said.

Freddie W, born Freddie Wong, is a partner in RocketJump Studios. The studio produced “Video Game High School” and “Doctor Horrible’s Sing-a-long Blog” from KickStarter funds raised from fans. “Doctor Horrible” was a three part series made by Neil Patrick Harris, Nathan Fillion, Felecia Day and directed by Joss Whedon. It was made in 2008 during the writer’s strike.

“There is all of this online content that proves it is a successful business model,” Hutfless said. “Hopefully, with Netflix getting attention from mainstream audiences with awards, internet content will get some deserved attention.”

Charlie Matthews, junior in biology, said this could be a boon for others and a bane of Netflix.

“Hopefully, it is a precursor for more recognition of web based shows,” Matthews said. “I’m not just talking about the big names in digital streaming. I’m thinking about all web based entertainment media. I think it would be more beneficial for the industry if smaller more indie web series can get more support, like ‘Dragon Ball Z Abridged.'”

“At the same time, cable and broadcast would crack down on streaming,” Matthews said. “Netflix works like radio does, paying licensing fees for content.”

And pay it does. According to Hollywood Reporter, Netflix pays out around $200 million for Disney movies and $50 million for the “Lost” series.” Price tags like this are why Netflix originals have small budgets and why Netflix does not have everything up on its site.

“These online shows have low production costs and are cheap to distribute,” Hutfless said. “Spending that little and later making real money is hard to beat, be it Netflix or otherwise.” 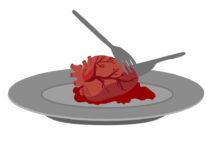