The CVB has approximately $1.2 million of revenue annually from the transient guest tax, which is a 6 percent tax. Of that $1.2 million, 33.5 percent comes from shopping in the area.

“We’ve got over a million dollars here,” Commissioner Wynn Butler said. “And is the tax payer getting the correct return on it? I think we can tweak it to get a better return on it.”

Of these funds, 63 percent go to marketing purposes. This includes but is not limited to radio, video and print publications advertising the city of Manhattan. The Manhattan Visitor’s Guide, an award-winning publication, is produced by the CVB. They currently also produce “Minute in Manhattan,” a quick video clip located on the CVB website.

Hibbard showed video testimonies on the benefits of CVB. At the conclusion of the meeting several business owners spoke on behalf of CVB and the good they have done for their businesses and the Manhattan community as a whole.

“Our CVB, right here in Manhattan, is one of the best run in the entire state,” Hilgers said.

In the last year, CVB helped bring 43 first time groups for meetings into Manhattan. Not including K-State sports and other activities that are not associated with the CVB, there were 174 groups in Manhattan over the past year. Notably, the National Festival of Breads moved from Wichita to Manhattan after working with the CVB this year.

Also up for discussion was the manner in which the CVB is run. Currently, there is a steering committee of 11 members—six hoteliers, four from hospitality and one chairman, which help to direct the actions of the CVB. However, no technical restrictions are in place, nor are there any existing term limits. The only limitations currently are that the Chamber approves the budget and program of work at the end of each year.

It was suggested that the commission consider implementing an advisory board that included four hoteliers, four from hospitality, one business person and one ex-official in place of the steering committee. It was also suggested that these positions run on a rotating three-year term cycle.

After much debate, it was decided that more information was needed to make a knowledgeable decision and the commission asked the CVB and CTC staff come up with alternatives to the current system and present their ideas and findings at a later date. 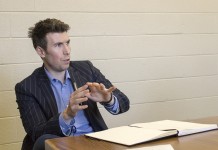 K-State to partner with English university on international tourism research

K-State to partner with English university on international tourism research