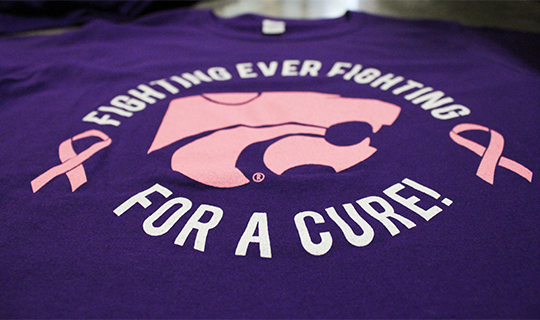 Editor’s Note: This was written for an MC200 class through the A. Q. Miller School of Journalism and Mass Communication.

October is National Breast Cancer Awareness Month and is designated as a time when fundraising and support are given to breast cancer education, awareness and prevention.

The Sigmas held a booth in the Union to collect donations for breast cancer education and awareness.

Darren Ricketts II, treasurer for the Sigmas and senior in hotel and restaurant management, said the Sigmas also held an event called “Pic in Pink.” At the event, members wore pink shirts to Old Stadium and took a picture with other students who participated.

Ricketts said what he enjoys most about being involved in Breast Cancer Education and Awareness Month is educating others on the subject.

“My favorite part of this month is informing fellow students and faculty on breast cancer and how severe it is,” Ricketts said. “Watching someone grow to care about the subject excites me.”

The Sigmas have not yet tallied the amount of money raised from their fundraising events this month.

The Epsilon Mu chapter of Zeta Phi Beta raised funds for breast cancer awareness with an event called “Hands On,” held in the Union from 10 a.m.-2 p.m. Monday, Oct. 21.

“Our event was fun to be a part of,” Egypt Edwards, treasurer for the Zetas and junior in agronomy, said. “It not only put Zeta Phi Beta’s name out there, but also raised awareness for breast cancer.”

The event gave students and faculty the opportunity to donate money to the cause. After doing so, they were allowed to sign their names and put their handprints on a drawing of either a healthy or cancer-infected breast.

“Our event this year was eye catching,” Edwards said. “It caught [people] off guard.”

This year, Zeta held a kickball tournament on Oct. 5 with a registration fee of $50 per team. The event had more than 10 teams participate. They also sold T-shirts on campus and at sorority and fraternity houses to raise money.

“My favorite part of the month so far is interacting with people,” Jamilah Watkins, one of the philanthropy chairs for AKA and junior in life science, said. “People you don’t know are willing to donate since it is going to such a great cause.”

AKA teamed up with the Black Student Union at the beginning of the month in order to get more informed. Gertie Williams, Junction City resident, came to campus to speak to both groups. Williams began her own organization, It’s About Me Breast Cancer Awareness Association, which helps women in the Riley County area who are currently going through chemotherapy or radiation for breast cancer.

“Gertie [Williams] was really informative,” Watkins said. “Everyone was attentive and asked questions.”

AKA also held a booth in the Union Oct. 7-11. At the booth, members of AKA had jars for donations with their members’ faces on them. The member whose jar collected the most money took a pie to the face at their two team, 5-on-5 powderpuff football game on Oct. 17. The winning AKA member raised more than $100 in that particular jar. The booth also featured $1 raffle tickets that entered the purchaser to win one of seven $25 gift cards from local Manhattan businesses.

AKA also has a basketball tournament today. Shantell Dixon, the other philanthropy chair for AKA and senior in social science, said the tournament will feature eight teams of 3-on-3 basketball.

None of the greek organizations know yet the total amounts of money they raised to fund breast cancer education and awareness this month, but Watkins said AKA members are expecting the total amount of money raised by their sorority this month to be higher than ever.

Dixon said she is passionate about AKA’s philanthropic involvement and is looking forward to the event.

“AKA is big on service,” Dixon said. “We want to make the community more aware. Breast cancer hits home for a lot of us, because we know someone who has fought the disease. It’s a great feeling to be able to spread knowledge.”

In October, we wear pink

Zeta Tau Alpha sorority house mom there for her women since...