K-State alumna Melinda Taylor started working at her hometown Wendy’s when it opened in 1984. She said that then the wait for a drive-thru meal was a couple of minutes, tops.

“The drive-thru is where I spent most of my time [working],” Taylor said. “The wait time was short, or I would have remembered customer complaints. It was really quick — cars moved through pretty fast.”

Today, customer complaints may be on the rise. According to a September 2013 Drive-Thru Performance Study conducted by QSR Magazine and Insula Research, consumers are waiting in drive-thru lines longer than ever before.

For example, this year, Chick-fil-A’s average speed of service was 203.88 seconds or about three and a half minutes, its slowest speed since 1998.

Brianne Pierce, senior in microbiology, has worked at Freddy’s Frozen Custard over the past couple of summers and said she didn’t notice that a slower wait time for fresh and warm food was a huge issue for consumers.

“Complaints were occasional,” Pierce said. “The most complaints occurred in the drive-thru on the weekends, especially before or after a movie at the nearby theatre when we had a lot of customers.”

Pierce said she would explain that the food was on its way and that that Freddy’s makes burgers after they are ordered so it may take a little longer. She added that if something like onion rings were ordered, the wait would be longer because some items take longer to cook.

“Sometimes people ask for lettuce-wrapped burgers or off-menu salads, which is fine. We are glad to make special orders for our guests,” Pierce said. “It just may take longer to get the order out, especially in the drive-thru.”

Complex orders can contribute to the increased wait time for food in drive-thrus. Burgers, for example, now come with a wide array of toppings instead of the traditional onions, lettuce, pickles, mustard and ketchup. Burger King’s slogan “have it your way” is great for a consumer who wants variation, but it also leads to more specialized orders, which ultimately takes more time.

“It completely depends on the amount of guests in line and if you have a large or very specialized order,” Pierce said. “These may take a longer amount of time, and you have to take into consideration if the people ahead of you in the drive-thru had a large and/or specialized order. Normally, there is an ideal time window on our side between order and food preparedness. Then, if there are people ahead of you, anticipate possible delays. We are fast, but we also value fresh and correct.”

Nick Strecker, sophomore in political science, said he is not too concerned with the additional minutes it takes to get food at a drive-thru.

“I think it is more efficient to have drive-thrus,” Strecker said. “It saves more time than waiting in line inside of a restaurant such as McDonald’s.”

The study showed that Krystal, a fast-food chain with restaurants in the southeastern part of the United States, has the longest wait time, with an average of 217.89 seconds, a little over three and a half minutes from end of the order being placed to the food being in one’s vehicle.

“The most time I have spent waiting for food at a drive-thru was about 20 minutes,” Strecker said. “Even so, that is rare, and it is definitely a good thing to have for people who are in a hurry. It is like the Dasher program at the dining halls at K-State. They are both meant for people on a schedule and need their food quickly.”

Instead of orders coming out quickly but wrong, the study showed that companies are attempting to get orders correct and fresh.

“The people at the window are working hard to ensure everything goes smoothly from getting the correct food from the kitchen, making sure the drinks are correct and making sure the guest is being served courteously and quickly,” Pierce said. 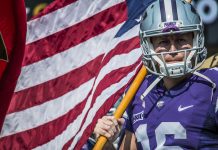 OPINION: McDonald’s does not deserve its awful reputation

OPINION: McDonald’s does not deserve its awful reputation