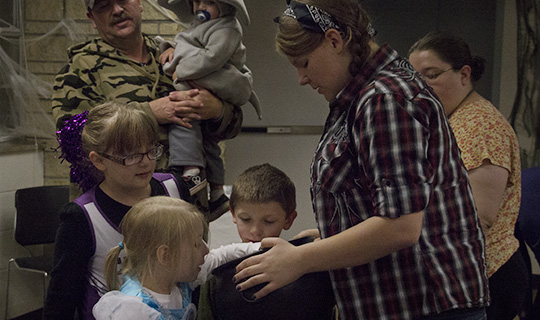 The residence halls resounded with the laugher of children Thursday night, but not that of grown-up children playing video games or studying for tests. The children in the dorms last night had their sights set on the highest goal any kid could have on Halloween: scoring the best candy.

Students in the dorms volunteered to pass out candy while costumed children and their parents walked through the hallways Thursday. According to several parents, trick-or-treating in the dorms was a much safer option.

“It’s great for nights like these when it’s cold outside or it’s rainy,” Christy Sauer, a Manhattan resident, said. Sauer and her daughter Libby, age 10, have been trick-or-treating at the dorms for the past six years.

For others, trick-or-treating runs in the family. Lisa Mead, junior in secondary education and social sciences, trick-or-treated with her cousins, who are from St. Marys, Kan.

“We’ve been here for many years and I just love watching the college kids interact with the actual kids and seeing that they care,” Mead said.

As children and parents walked throughout the dorms, some students provided tours for the families. Sydney Shields, freshman in kinesiology and nutrition, was one such volunteer in West Hall and took families up to the fifth floor and through the rest of the building down to the lobby.

“I think this is a good idea,” Shields said. “There’s actually a lot more the kids can do in the lobby and it’s more efficient that way.”

According to Jordan Fox, freshman in fine arts and a resident of West Hall, said each floor did something different. For example, the second floor of West was decorated like a maze. Fox, who lives on the fifth floor, said they decorated their floor with blacklight paint.

“It’s been really cool,” Fox said. “We haven’t had many kids, but it’s cool to see what the different floor did.”

Manhattan residents are keeping the tradition of trick-or-treating alive in their own families. Amanda Broccolo, senior in animal sciences and a Manhattan native, brought her family to the dorms because she trick-or-treated at the dorms as a child.

“I just love it here,” Broccolo said. “It’s safer here and close. We’ve been downtown, but we don’t go anywhere else.”

“My roommate and I did it when we were growing up,” Rogers said. “It’s a family thing.”