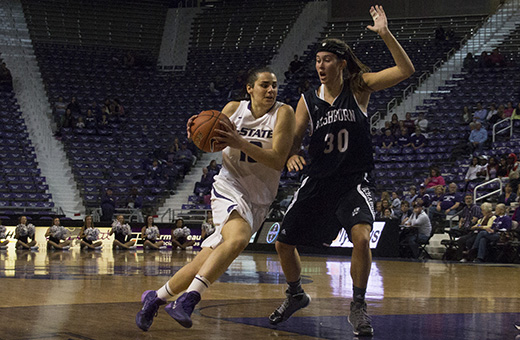 As the Wildcats prepare to close out their exhibition slate tonight, they’ll look for continued development within the six freshmen that saw the floor against the Ichabods.

Of the 85 points in K-State’s opening victory, 62 came from its talented group of freshmen.

It’s an undeniable luxury to have the depth the Wildcats have. Patterson understands the potential her team has, but it’ll come down to defining leadership roles on her youth-filled roster.

“I feel like Haley (Texada) and Chantay (Caron) have worked extremely hard,” Patterson said following Monday’s win. “Katya (Leick) worked hard even though she is just integrating in. We have got that core of people coming back, and Heidi (Brown) does not get a lot of minutes usually, but she is teaching these young ones what Kansas State basketball should be. I think it is really exciting to see that in its early stages.”

Beyond the youthful presence comes a unit of posts that Patterson hasn’t had the comfort of possessing.

Within the trio, consisting of freshmen Breanna Lewis and Erica Young and senior Katya Leick, the Wildcats showed their potential of running a dynamic post offense.

“It is beautiful,” Texada said of the interior height. “It is a faster paced game that we are playing. We are moving around the perimeter and we see our big 6-foot-5 post open down there. You just throw the ball in and she will put it in the hole.”

With a challenging non-conference slate ahead, capitalizing on exhibition performances becomes even more important for K-State. In total, 20 of their upcoming opponents reached postseason play last season.

“They are going to be good,” Washburn head coach Ron McHenry said of the 2013-2014 Wildcats. “Leticia Romero shot the ball well and was hard to guard. With the new rule, you cannot
touch somebody out on the floor. She is tough and they have some
stretch shooters. Their big kids are young and are going to develop.
They are just young kids and a lot of them are only freshmen on the
floor.”

Similar to the Wildcats, Alaska-Anchorage will be looking to build depth around just one senior. Senior forward Kylie Burns, a Kansas City, Kan. native, was a 2013-2014 all-Great Northwest Atlantic Conference pick. She is the returning leading scorer for the Seawolves with an average of 10.6 points per game.

The Seawolves are coming off of a 17-10 season, including a 11-7 record in conference play.