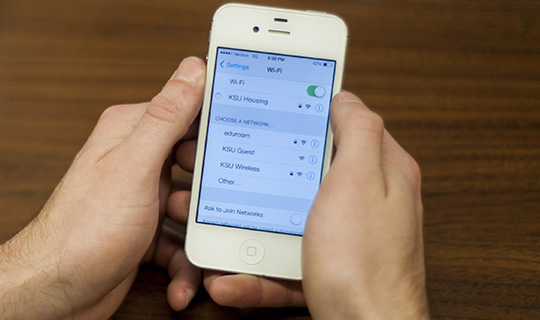 With 61 wireless spots on K-State’s Manhattan campus, many students are finding issues when connecting to the wireless Internet. ResNet is the Residential Networking help team that is here to help students with computer-related issues.

A few years ago, few students had laptops and most relied on desktop computers. But in this day and age, just about every student has a laptop, a smartphone and some a tablet on top of that, all devices that utilize K-State’s wireless Internet connections.

“There are 500 access points, probably with over a million devices on it,” Patry said.

Poor placement of the access points can make it difficult for a lot of people to be using it at the same time.

“If I cannot get Wi-Fi, I just move around until I can connect to the Internet,” Ashley Foley, freshman in architectural engineering, said.

According to ResNet’s network logs, the wireless Internet is most crowded from 8 p.m. to 1 a.m., then slows down a bit before becoming busy again at 10 a.m. Sunday evenings are also crowded times to use the Wi-Fi.

According to Patry, the Kramer Complex is presumably the worst place for Wi-Fi access as the access points were not installed properly 10 years ago. The Kramer Complex, in need of an update, is working towards upgrading their antennas to omnidirectional antennas, allowing access to the wireless points from more areas.

Hale Library typically does not have as many problems regarding Internet access. With Hale, one of the better areas on campus for Internet access, according to Patry, is Bluemont 101.

The Honors House is testing a new mini Wi-Fi access point system, placing access points in every student room. This allows for fewer devices to connect to each access point, allowing those that do connect to have stronger service.

While ResNet does not manage the school’s Wi-Fi, they do more of helping students to connect to the Wi-Fi.

“We feel the exact same pain as everyone on campus, we want everyone to have Wi-Fi,” Patry says.

As everyone moves into the dorms with the beginning of each semester, ResNet helps approximately 2,000 to 3,000 people within a one to two week period. Nearly 1,800 students are assisted by ResNet during the official move-in weekend alone.

There are three Wi-Fi networks in use by the campus: KSU Guest, KSU Housing and KSU Wireless. KSU Guest is intentionally set up to run a bit slower than the other networks. The guest network, however, temporarily shut down a few weeks ago as its service was getting maxed out. This was another attempt of the help desk to get the students into the habit of using KSU Wireless or KSU Housing networks.

“KSU Housing is better because you know it is protected,” David Meredith, freshman in mechanical engineering, said. “KSU Guest network, I feel, is more prone to being scammed.”