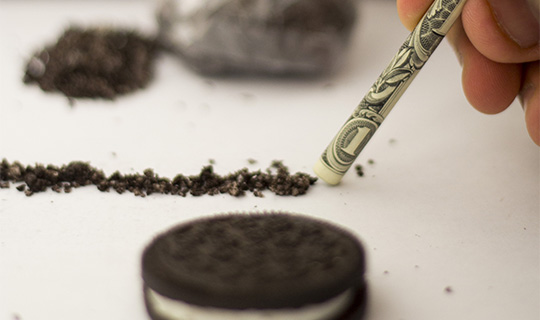 With Halloween festivities wrapping up and the holidays just around the corner, this time of the year tends to be a time of sugary delights. Chocolate, candy, and sweet baked goods line store fronts, and many with sweet teeth are not shy to indulge.

“I have eaten two packages of Halloween Oreos already this week,” Jessica Pennybacker, sophomore in secondary education, said while taking a cookie from her third package. “If there is such thing as an addiction to Oreos, I probably have it.”

One savory snack, it seems, may actually have unforeseen consequences for unsuspecting consumers.

According to a recent study conducted by an undergraduate student at Connecticut College in New London, Conn., the brain actually responds to Oreo cookies similarly to the way it responds to drugs.

The experiment was originally done to see how lab rats react to Oreos versus their reaction to cocaine.

The rats were put into a maze with two sides; if the rats were able to maneuver the maze on one side they were rewarded with Oreos, while on the other side, they would receive bland rice cakes. As it turns out, the sweet, sugary taste of an Oreo attracted the rats more then the plain rice cake.

The students then conducted the same experiment, but this time the rewards at the end were given a shot of either cocaine or saline. The results revealed that rats spent as much time on the side of the maze with the cocaine as they had on the Oreo side in the previous experiment.

The students also measured the expression of a protein called c-Fos. This protein, located within the nucleus accumbens section of the brain, is strongly correlated with pleasure sensation and also affects inclination to addiction to external stimuli.

“It basically tells us how many cells were turned on in a specific region of the brain in response to the drugs or Oreos,” said Joseph Schroeder, associate professor of neuroscience and director of the Behavioral Neuroscience Program at Connecticut College who also led the research, in a Connecticut College press release on the study.

Oreos activated cells in this brain area more than both cocaine and morphine, which suggests that the combination of sugar and fat may be more delectable to our brains than drugs.

Although the experiment results were found in lab rats, this is generally standard protocol in scientific research procedures. Often, researchers find what they test on the rats to be relevant to humans. This study assumes that since rats and humans often behave in the same manner, humans may also have the same reaction to Oreos and could find them to be addicting.

“If future studies prove this to be relevant in humans, it could be associated with some individuals having susceptible brain chemistries, making high calorie, high fat foods more irresistible,” Dianna Schalles, director of nutrition services at Lafene Health Center, said. “Eating behaviors are influenced by multiple factors. However, as interesting as a single study may be, it is likely not the magic solution to avoid tempting foods.”

To find out more about daily nutrition and calorie intake, visit the Nutrition Counseling page on Lafene Health Center’s website.

International students speak to how American food affects their weight