Note: This was written before No. 3 Oregon’s redemption game against No. 5 Stanford and No. 6 Baylor’s test against No. 10 Oklahoma on ESPN Thursday night. Safe to say the outcome of those games could be pivotal in Marcus Mariota’s and Bryce Petty’s Heisman fate. Since Mariota, Petty and AJ McCarron all are coming off bye weeks, not much changed in this week’s list, but this week could be the biggest shakeup all season.

1. Jameis Winston (QB, Florida State) – Winston wasn’t flawless in the Seminoles’ 41-14 blowout of in-state rival Miami. He threw two interceptions in the first half, after which the Seminoles led just 21-14 before scoring 20 unanswered in the second half. The freshman did complete 21 of 29 pass attempts for 325 yards, and rushed for 27 more to lead the Seminoles past one of their few legitimate remaining threats to an undefeated season. Winston’s team has outscored its three ranked opponents – Maryland, Clemson and Miami – 155-28. The Seminoles close the season on the road against Wake Forest, at home against Syracuse and Idaho before a regular season contest at Florida. If Winston and the Seminoles make it through that stretch without a scratch, it’d be hard to imagine his name not being echoed in serious Heisman conversations.

2. Marcus Mariota (QB, Oregon) – First on my list a freshman, second a sophomore, (spoiler alert) the third will be a junior and to no surprise my fourth is a senior. Not planned, I swear, but it reveals how college football is slowly moving closer to the culture of college basketball, trending with an increasing number of younger players becoming stars. Mariota was in the Heisman discussion a year ago as a freshman, but a loss to Stanford ended Mariota’s Heisman hopes and the Ducks’ national title aspirations. The No. 3 Ducks can take a step closer than last year with a win over No. 5 Stanford in Stanford, Calif. The win would almost guarantee the Ducks the Pac-12 North, with the Pac-12 South still up for grabs between Arizona State, Arizona, UCLA – who the Ducks beat 42-14 – and USC.

3. Bryce Petty (QB, Baylor) – Until a team figures out a how to slow down Baylor’s offense, led by Petty, long enough to score more points than the Bears, there’s no reason to think the junior quarterback won’t receive an invitation to New York come December. The path won’t be easy though, as the Bears’ final five games consist of home games against No. 10 Oklahoma Thursday and No. 25 Texas Tech, at No. 14 Oklahoma State and TCU and at home against Texas. Talk about a back-heavy schedule. Running the table won’t be easy, but having three of its final five games at home and one of the roadies being against 3-6 TCU, it’s not implausible. If somehow Winston, Mariota and Petty – and you know, top-ranked Alabama – all end the season undefeated there will be two very loud debates. One over which two teams deserve to play in the BCS National Championship, and the other over which of these quarterbacks deserves the Heisman trophy.

4. AJ McCarron (QB, Alabama) – It’s been a while since Alabama has been tested. Almost two months, actually, since the Johnny Manziel led Texas A&M Aggies came up a touchdown shy of taking down the No. 1 team in the country. Since Alabama’s only win by less than 25-points, the Tide have outscored their last six opponents 246-26. Coming to Tuscaloosa, Ala., Saturday is the Zach Mettenberger-led LSU Tigers, who are coming off a bye week two weeks after a road loss to Ole Miss. McCarron’s national title odds probably exceed his odds of winning a Heisman, but crazy things can happen in the final weeks of college football. And more often than not, they do.

5. Johnny Manziel (QB, Texas A&M) – Needing more help than anyone on the list, despite being on pace to blow by his freshman Heisman winning numbers is Johnny “Football” Manziel. One thing Manziel can’t improve upon is his team’s win-loss record, after losses to Alabama and more recently to Auburn, both at home. Unless players above him lose, Manziel is unlikely to win over an undefeated quarterback and won’t be facing a vote-repelling defensive position.

ANALYSIS: Women’s basketball gets a taste of their own medicine in loss to Baylor 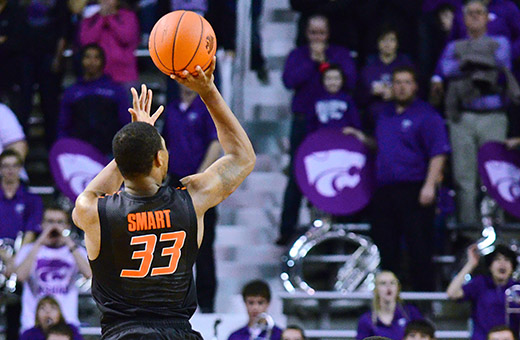 By the numbers: Phillips 66 Big 12 Championship