Topeka Police are looking for a suspect in a stabbing incident that occurred Sunday night. According to officers, two white males were walking in an alley in central Topeka just before 10 p.m. when another white male approached and stabbed one of the two men. The suspect is described as being in his early 20s and standing over 6 feet tall. After stabbing the man, the suspect fled on foot while the victim’s friend briefly chased him. The victim in the incident received non-life threatening injuries from his wounds. Police officials said the case is still under investigation.

A Wichita woman is free on probation after she admitted to driving drunk in a crash that killed her 6-year-old son. Crystal Ross, 31, pled guilty to involuntary manslaughter back in September, a charge that can lead to a sentence of about three years in prison. Both prosecutors and Ross’s defense attorneys recommended she be placed on probation rather than face prison time. The accident occurred in January of this year when Ross lost control of her vehicle and rolled into a ditch. Investigators in the case said none of the occupants in the vehicle were wearing their seat belts. 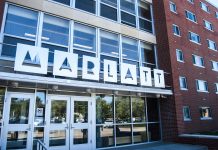