With the roll out of the federal market exchange for health insurance under the Affordable Care Act having started poorly, the secretary of Health and Human Services and former Kansas governor, Kathleen Sebelius, is coming under fire for it. As the secretary, it is her job to oversee the program. There have been calls for her to be fired or resign because of problems that have occurred under her watch.

An article by Major Garrett from CBS News from Nov. 6 stated that one of the critics is Sen. Barbara Mikulski of Maryland. While she has been a big supporter of President Obama, she has spoken out on the controversy encircling the Affordable Care Act since the federal exchange website launched.

“The launching of the Affordable Care Act has been more than bumpy,” Mikulski said to CBS.
“I believe there’s been a crisis of confidence created in the
dysfunctional nature of the website, the canceling of policies, and
sticker shock from some people. We read in The Baltimore Sun this
morning that 73,000 Marylanders’ policies will be canceled. So there has
been fear, doubt, and a crisis of confidence.”

Mikulski isn’t one of those calling for Sebelius’ job, but such words from a fellow Democrat has been taken as a bad sign.

“10 senators sent a letter to the president asking for her to be fired,” John Fliter, associate professor of political science, said. “I don’t think she should be fired. I think she is making an effort to fix the problems. The biggest problem with the federal exchange is not her fault because states chose to not set up their own exchanges.”

According to the Kaiser Family Foundation, there are 17 state-based marketplaces, seven jointly run between the state and the federal government, and 27 that have opted for federal control of their state’s marketplace. A CNN article by Elizabeth Landau and Caleb Hellerman from Oct. 19 stated that the state marketplaces are working for those signing up. More than 250,000 people had signed up for new insurance plans as of Oct. 18.

“I don’t think Secretary Sebelius is in any way proud of the roll out,” Ethan Bernick, associate professor of political science, said. “But some of the implementation of this program was bad from the get-go. More than half of the country have left it up to the federal government to take care of the exchange program.”

That in effect has caused a logjam of Internet traffic on the troubled website.

“It would make much more sense if Kansans or the like could just go to their own state site,” Fliter said. “Instead of hundreds of thousands going to their own website, millions are being funneled into one.”

The collective idea is that this part is not on Sebelius, but the stumbling block most certainly is.

“The department made some mistakes in selecting contractors, but that is the growing pains of launching a big program,” Bernick said. “It is heightened because of those who are against the program. No one would argue that it was rolled out well, and everyone expected better. The people who are not in favor of the program are going to be unhappy regardless, those in favor wanted it handled better.”

It is ironic in the aspect that the people and states most against the program are the ones that are most affected by being the highest uninsured in the nation, according to a Sept. 19 article by Drew Desilver from the Pew Research Institute. The federal website being on the fritz isn’t helping the matter though.

“It seems like there are difficulties with doing the program through a website,” Micah Winkley, graduate student in political science, said. “Troubleshooting would be problematic with all of the customers it would have. Millions of people getting online at once is quite an endeavor. I think the biggest problem for Sebelius was going around on the late night circuit during the shutdown telling jokes. It doesn’t look good.” 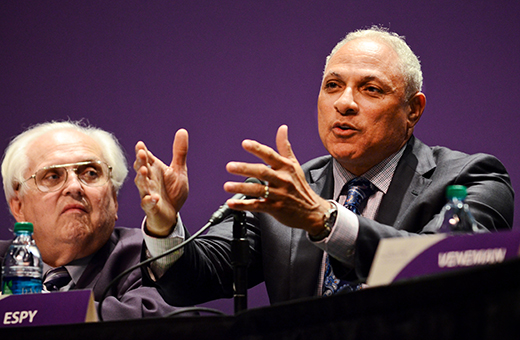