The well-known band, Love and Theft, had the Wareham Opera House filled with dancing and
drinking, and gave the crowd a Wednesday night that would make Friday jealous.

It’s easy to see why fans keep coming back for more of Love and Theft each year. Although their rise to country stardom is rapidly increasing, the two haven’t left behind their humble roots, as they make their shows about an experience with the fans.

From taking as many onstage “selfies” as possible with mobile phones the crowd practically hurled on the stage, to staying until the dawn of Thursday morning to sign autographs and take pictures, it’s impossible to resist Stephen Barker Liles and Eric Gunderson.

They kicked off their set with one of their most popular tracks, “Runaway,” and kept the soulful country music coming. Gunderson and Liles share both guitar and vocals, and their organic sound is something that kept boots stomping and girls swooning all night long.

Love and Theft always bring rock tones, country melodies and lyrics that everyone can relate to, even with something as simple as, “Girls Look Hot in Trucks.”

For a band of their caliber, nothing about their show seemed impersonal, over-prepared or mass produced like that of equally talented bands. They made it about what happens when Nashville and Manhattan spend the night together.

“They put on a damn good concert,” Brett Robinson, senior in agricultural technology management, said. “When they played, ‘If You Ever Get Lonely,’ that was my favorite part.”

Although Liles said he prefers Kansas and it’s simplistic charm, Gunderson had his start in New York.

“This is our first time in Manhattan,” Gunderson said. “I’ve been to Manhattan before, but not in Kansas. I was born in New York, and lived there until I was seven.”

Liles and Gunderson have a lot more in common than guitar and vocals, as Liles’ father is a pastor and Gunderson’s father is a worship pastor. Their beginnings in faith have given them a healthy perspective on rising to fame.

“You have to stay balanced as much as you can,” Liles said. “It’s crazy out here, so you have to keep people around you that are going to hold you accountable and that’s the biggest part.”

Liles and Gunderson are in good company at their label, RCA Nashville, among some of their main influences and legendary favorites.

“Mainly, Elvis Presley, who was on RCA,” Liles said. “He’s one of our biggest influences and Alabama, what an honor. It’s cool to be part of that history. Hopefully we’ll make them proud and keep working hard.”

Hard work has brought the two of them this far and will continue to be the catalyst for their success. Besides being on tour, they’re balancing a full regimen of studio time and the excitement of growing families.

Cracked nails and long nights aside, the show was a success and is proof that Manhattan is becoming a hub of country music. The city couldn’t help but lure some of the best into stopping by the Wareham. They gave a small town a big time show.

If their first time in Manhattan filled up the Wareham, their next visit will surely fill the place up to capacity with a line around the block.

However, the popular venue’s concert list only gets more impressive as they bring in bands like Randy Rogers Band tonight and Aaron Lewis next week. Manhattan seems to be the host to some of the best and leaving quite the impression on some big country names. 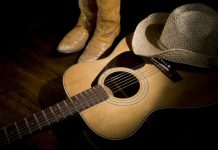