This season was supposed to be a big step forward for TCU after the team finished seventh in the Big 12 in its inaugural season in the league. Going into this weekend’s matchup with K-State, though, TCU finds itself right where last season left off: seventh place in the Big 12. The Horned Frogs’ 4-6 overall record and 2-5 mark in conference play makes many wonder what happened to the team that was picked to finish third in the league and earned nine first-place votes.

On offense, TCU has settled on a system that’s similar to K-State’s, running out different quarterbacks in different situations. Senior Casey Pachall missed most of last season and returned in 2013 as the Horned Frogs’ starter, but a broken arm on Sept. 7 caused him to miss more playing time. Sophomore Trevone Boykin, who started in his absence last season, did so once again this year, and continues to play an important role on the team even with Pachall healthy.

Of the two, Pachall is the pure passer, while Boykin brings incredible mobility and athleticism that few quarterbacks in college football can match. His arm leaves something to be desired, though. Patterson, like Snyder, likes to play both at the position in different circumstances.

TCU has taken this two quarterback system one step further than K-State has, as Boykin has found himself lining up at wide receiver on some plays and now has 20 catches for 165 yards on the season to go along with 303 yards rushing and 1176 yards passing. Boykin has accounted for 11 touchdowns this season, six on the ground and five through the air.

Pachall has thrown for 953 yards with three touchdowns and six interceptions this season, averaging just over 190 passing yards per game, but unlike Boykin, he is not a threat at all with his legs with a total of four rushing yards in 2013.

The Horned Frogs will likely be starting a backup at running back: sophomore Aaron Green. Green rushed for a career-high 72 yards last week against Iowa State, and Patterson has stated that Green will probably start against the Wildcats. TCU’s normal two starters at the position are both doubtful to play: senior Waymon James is suspended after violating team rules and sophomore B.J. Catalon is injured. Neither player made the trip to Iowa State last week.

Catalon is the team’s leading rusher with 405 yards and has five touchdowns, while James is third with 242 yards and four touchdowns.

On defense, the Horned Frogs pose a serious threat to K-State’s run-first offense, boasting the best rushing defense in the Big 12 and third-best total defense in the conference.

The defense has plenty of playmakers, starting with their linebacker corps. Junior Paul Dawson leads the team with 75 tackles and sophomore Chris Hackett is right behind him with 74. Dawson also has nine tackles for loss, while Hackett has picked off three passes so far this season, tying him for first on the team.

The secondary has a couple big name players in it, starting with senior Jason Verrett. The cornerback is currently nursing an injury and may not play, which would be a huge benefit to the Wildcats, but when he is on the field, he makes opposing offenses plan around him. Verrett was named a third team All-American by AP last season and was named a first team All-American by Sports Illustrated. His six interceptions were top in the Big 12 and he was second nationally with 1.69 passes defended per game. This year, his numbers are slightly less gaudy, with two interceptions and 14 passes defended.

Starting opposite to Verrett is junior cornerback Kevin White, who has three picks and defended 10 passes this year.

Joining them in a stacked secondary is junior safety Sam Carter. Carter is tied for first on the team with four sacks, adding in three interceptions and 6.5 tackles for loss along with his 37 tackles. Carter was named to the All-Big 12 Second Team by both the Big 12 coaches and AP for his 2012 campaign.

As a team, the Horned Frogs have 17 interceptions, which is tied for fourth in the nation and leads the Big 12.

Gary Patterson’s teams have always been strong on defense, leading the Big 12 in total defense last season and ranking at or near the top almost every season under Patterson as a member of the Mountain West conference in past seasons.

While TCU has failed to live up to expectations this season, they are still a good team that uses a great defense to hang in there with the best of the Big 12. They will not underperform forever, and opposing teams should be nervous for when the offense starts to click and the team finds the form many thought they would display all season. 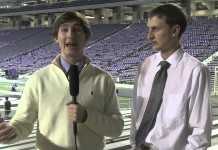 Players of the Game: K-State vs TCU