Home Culture Feature Take the shopping stress out of the holiday season – do it...

The holidays are a fun time for gift giving, but all those gifts can get expensive. Making gifts can help keep costs from getting out of hand and allows the gift to be more personal.

Pinterest and many other do-it-yourself websites have tons of ideas for DIY gifts to make for anybody on your gifting list.

I looked around on Pinterest for a gift for my mom and found the perfect simple DIY craft. Like many moms, my mom loves pictures. I decided to make a long, vertical canvas with smaller canvases glued to it that display pictures, and a few inspiring words down the right side. This worked out perfectly for my family, because I was able to put a picture of each one of my siblings and a family picture at the bottom.

I painted the edges of each of the smaller canvases black because I decided to use black and white pictures. On each of the small canvases, all I had to do was attach the pictures. I printed the photos as 3-by-3 pictures on plain printer paper and Mod Podged them onto the small canvases. After the back dried, I put another coat of Mod Podge on top of the photos to create a sealant.

After finishing the photos, I painted the entire large canvas solid red, which really made the black and white photos stand out. Then I just hot glued the four 3-by-3 canvases down the left side of the large canvas.

This project did not take me long at all. It took some time for the coats of paint and the Mod Podge to dry, but the time I actually spent working on it was no more than two hours total.

I already had the colors of paint that I needed, but paint typically costs about $1 per color. Using one of Hobby Lobby’s frequently-distributed 40 percent off coupons to buy canvases, the entire project can cost less than $15 if you already own some Mod Podge. If you don’t, Hobby Lobby sells 8 ounce bottles of it for around $5.

This project was perfect for my mom because she loves pictures. It would be easy to make it with different sporting team pictures for a brother or create a K-State one with the lyrics to “Wildcat Victory” down the side.

The holidays pose the challenge of trying to find a gift to give to all of your friends without breaking the bank. Simple things like hot chocolate in a mason jar are both useful and very cheap.

This is a quick and easy way to create a lot of cute, personal gifts to give to multiple friends for under $20. It is much cheaper to buy the hot chocolate in a big jar instead of individual packets. Likewise, it’s cheaper to buy the mason jars in a pack of six, rather than individually. It is also more appealing to the eye — and easier to use — if you unwrap each of the starlight mints before putting them into the jar.

Men are sometimes harder to make DIY projects for, but I found a cool DIY project that one could give to their dad, brother, boyfriend, or even a good friend. It is a custom wall art piece made of bottle caps. Men can be challenged when it comes to decorating with anything besides posters, but they will surely love a little change, especially if it’s a neat art piece made from bottle caps.

The idea is actually pretty simple. All you take is a piece of wood — you can use anything from a cupboard door to a picture frame. Paint the entire thing whatever color you’d like. Then all you need are a hot glue gun and lots of bottle caps — you’ll need to plan ahead a little and save them or have some friends help by donating to the cause. Hot glue them in lines or patterns to create a cool bottle cap wall piece that people can stare at in awe. Assuming you already have a lot of bottle caps and also a hot glue gun, this project will only cost the price of the frame and the paint. For me, I only had to spend $15 after a 40 percent off coupon.

This project was a little more tedious because I bought a fairly large frame and then had to glue each individual bottle cap, but it is definitely my favorite DIY this year. All of my friends are ready to make one for their dads, too. 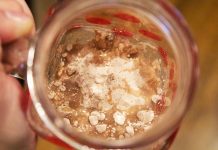 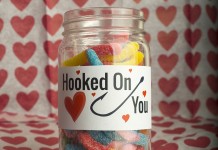 For parents, personal touch is everything