Delta Chi moved from colony status to a chapter on Saturday, Nov. 9, making it the first fraternity to charter on the university’s campus since Sigma Pi was founded in 2007. What this means is that the Kansas State Delta Chis are now nationally recognized by their headquarters to maintain a chapter on K-State’s campus.

On the day of its charter, Delta Chi also officially purchased a house. The house is located in the Fairchild neighborhood and will board four brothers, hold the fraternity’s composites, awards and artifacts, as well as be their showpiece for recruiting.

“It was a huge deal for this to all happen,” Eric Haun, senior in finance and president of Delta Chi, said. “We always knew that it was the goal three years ago in the fall of 2010 when we colonized, but I did not know what the timeline really looked like. When I got the news that we were chartering it really was probably the greatest news we could have gotten. It is a benchmark of how far we have come and our potentials of what we can grow to be,”

Delta Chi colonized on campus in 2010 and worked towards chartering for the past three years on campus. For Delta Chi to charter, they had to become functional in all areas, including recruitment, academics, service projects, intramurals, housing, finances, etc. They also had to petition the Delta Chi Board of Regents for its charter. The Chartering Petition contained all written programs, a statement of colony history, budget reports and a statement of purpose.

“There was a ton of work put into the entire process,” Aaron Frith, senior in construction science and Delta Chi president elect, said. “We have pretty much been working on becoming a charter since we colonized here three years ago. We have been putting on events and working toward our charter at everything we have done. By the end of it all we had a pretty huge binder that we got to turn in so it definitely feels great to have finally reached our goal.”

Delta Chi had two previous chapters on campus that were shut down for various reasons from low membership to lack of funding, with the most recent shutdown in 2008. This new addition at K-State now makes 126 chapters and colonies of Delta Chi in the United States and Canada.

The current generation celebrated officially becoming a chapter with a ceremony that included Pat Bosco, dean of students and vice president for student life, speaking to a crowd of nearly 200 brothers and guests about how this is possibly one of the greatest turn around stories on the K-State campus.

“A turn around is always difficult,” Bosco said. “It takes incredible leadership and a lot of determination. Delta Chis should be very proud of this kind of once in a lifetime accomplishment. It is kind of like the history of our K-State football team under coach [Bill] Snyder; it makes us all proud.”

The Delta Chi alumni appeared to be ecstatic about all of the work that the men have put in to become a chapter once again.

“It means a lot to us that we are a chapter again,” Spencer Kaufman, alumnus of K-State and one of the founding fathers of the current charter, said. “It is honestly kind of hard to put into words. The amount of work that all of the founding fathers put in to get to this point is incredible. We started off with 26 founding fathers in Delta Chi. It was so much work that a lot of those guys did not stick around. To go from just 16 men up to 53 and chartering within three years is outstanding. It is a representation of all the hard work we have done. We have raised thousands of dollars for our philanthropy, we have participated in homecoming, but the charter is really something that is just incredible.”

The greek community also seems to be happy for the men to be officially recognized as a chapter.

“We are always excited to see the greek community grow and we wish Delta Chi the best of luck in their endeavors,” Brett Newell, junior in business finance and member of Tau Kappa Epsilon, said.

The alumni do have some advice for the men to ensure that they will keep their charter this time around, as well as stay true to their roots.

“The undergrads have to recognize that the work still goes on and they can continue to grow the chapter,” Kaufman said. “My biggest fear is them losing their initial values. I do not want them to lose sight on what we were re-founded on. As the fraternity grows it gets harder to stay true to your values and stay different from all of the other houses on campus. The reason we have been so successful is because we are not like the other houses and we do not try to be like all of the other fraternity houses. I just hope that Delta Chi can continue to grow based off of their roots and keep to the original values that we instilled in the men.” 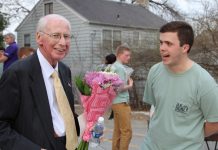 Spaghetti and Snyder: Over $3,000 pledged to cancer research in coach’s name 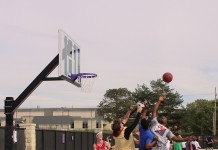 Spaghetti and Snyder: Over $3,000 pledged to cancer research in coach’s...