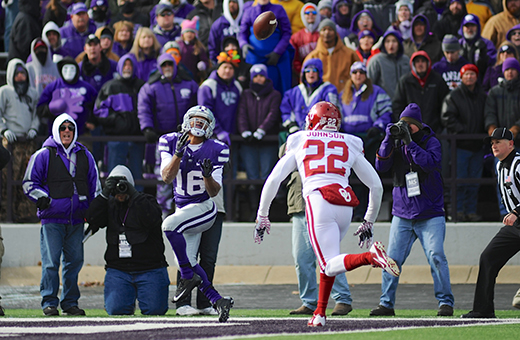 Despite temperatures below freezing all game, Tyler Lockett was red-hot against the No. 20 Oklahoma Sooners, but K-State could not pull out a win, losing 41-31 to fall to 6-5 on the year and 4-4 in conference, while the Sooners rose to 6-2 in the Big 12 and 9-2 overall.

In the last home game for 27 K-State seniors, the game close for most of the first three quarters, but the Sooners separated late and took the victory, making head coach Bob Stoops the winningest coach in program history.

“This is a collective loss,” head coach Bill Snyder said after the game. “Oklahoma played very well, they were the better team. Played better, coached better, did everything better than we did. That’s not the way we’ve come through the last half of the season, but thats the way we played today.”

There was one aspect of K-State’s game that was far superior to their opponent’s and that was the play of Lockett. The junior receiver broke his own single-game mark for receiving yards with 278, and his 162 yards on kick returns brought his all-purpose total to 440, which broke Darren Sproles’ record set in 2003.

The game looked rough for the Wildcats early on, as Oklahoma jumped out to an early 14-0 lead while K-State’s offense was sputtering. The Sooners had drives of 64 and 98 yards, and freshman quarterback Trevor Knight was running all over the Wildcat defense.

K-State finally found the end zone at the 10:05 mark in the second quarter when Waters found Lockett about as wide open as they come for a 48 yard strike to make it a 14-7 game.

Waters found Lockett again for a huge touchdown five minutes later, putting a ball right in Lockett’s basket in the end zone after the speedy receiver burned his coverage for the second time. K-State’s offense looked explosive on the drive, going 84 yards in less than two minutes and just four plays.

Down two scores, K-State all but ditched the running game as the Waters-Lockett connection was the only thing that was really working for the offense. Sophomore quarterback Daniel Sams rarely saw the field all game, logging just three carries for seven yards and no pass attempts. Waters, on the other hand, was 17-29 for 348 yards through the air, tossing three touchdowns while throwing two interceptions. Senior running back John Hubert only carried the ball nine times for 17 yards as well as the team ran for a combined 24 yards.

The Sooners answered Lockett’s second touchdown with a quick strike of their own, as Clay scored on a 64 yard run just three plays into the following drive to regain the lead 21-14.

The back and forth continued as Waters went deep to Lockett for the third time in three drives for the longest touchdown of the three.

After starting on their own 19, a penalty had backed K-State up to their own 10 yard line, when Waters found Lockett around midfield. The Oklahoma native sprinted to the end zone for a 90 yard score, tying the game at 21-21 with 3:40 left in the second quarter.

A field goal by the Sooners at the close of the half sent K-State to the locker room down 24-21 at halftime, but the scoring was far from over.

The two teams each kicked a field goal in the third quarter, but the Sooners ran away with it in the fourth thanks to two major miscues by K-State.

The first came on a short punt from Mark Krause from the back of the end zone that was returned 30 yards by Jalen Saunders to the K-State three, allowing Oklahoma to score on their first play.

On the following K-State drive, Waters’ ball to a tightly covered Curry Sexton was intercepted by Zack Sanchez, who returned it 71 yards for a pick six and widened the gap to 41-24.

The Wildcats brought it within 10 points when Waters rammed it in from two yards out to make it a two-score game with just over six minutes left, but a long drive by Oklahoma gave K-State less than three minutes to score twice. However, the game was over just a few plays later when Waters threw his second interception of the day, sealing the Sooner victory.

The game was a heart-breaker for the seniors of K-State in their last home game, but the team will travel to Lawrence for the Sunflower Showdown next Saturday against struggling Kansas for a chance to finish the season above .500 in conference play.