One of the strongest typhoons to ever break land hit the central Philippines this November, estimating to have killed over 4,000 citizens in Tacloban alone and more in other provinces surrounding the area. The death toll is expected to rise as time goes on and the stranded begin to use up their resources.

“One of the most difficult aspects of [Typhoon] Haiyan is the remoteness of a lot of the Philippines,” Bernadette Greenland, a member of the American Red Cross, said. “It is extremely difficult for a lot of our teams working out in the field to get to the devastated areas where there are washed out roads and roads covered with debris and fallen trees.”

Red Cross teams have reported bodies floating down rivers and bodies wrapped in plastic on the sides of roads, an attempt to respect those who have died from the disaster. What remains of the streets is littered with broken power lines, splinters of houses, turned over cars and numerous other objects.

“We are working to provide items that will help to sustain life for these people, items such as fresh water in bottles and nonperishable foods” James Insower, lieutenant officer in the Salvation Army, said. “Our main focus is to sustain the lives of the inflicted, however we are also working to improve the mental aspect of the victims as well.”

Insower and his teams also focus on caring for the people emotionally to help them through the traumatic devastation, which in turn allows the people to focus on their own survival.

The survivors of Typhoon Haiyan are not the only ones in danger. The Salvation Army is now realizing the danger their own responders are in, running out of resources to sustain themselves as they attempt to help the survivors.

“The lack of good roads down there is increasingly frustrating,” Insower said. “We can’t help people if we can’t sustain people long enough to get them out there.”

Ron Hensburg, volunteer for the Salvatinon Army, said that all of the organization’s work is made possible through donations and volunteers. 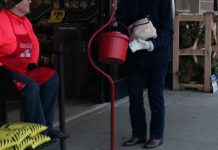