There was a moment of panic among a group of K-Staters when the channel could not be found. It was a Thursday night, and it was the first part of ABC’s “Scandal” winter finale.

Automatically, those who had gathered to view the episode sat down and became engrossed in the show.

Ten women sat and contently watched the hour-long episode in almost complete silence. When something unexpected happened or a plot twist was just too much to handle, the group would break into a quick cluster of conversation then return to silence.

Ultimately, the group established that drama is what humans are drawn and want to view. This is why watchers were drawn to “Scandal.”

Leading lady Kerry Washington plays Olivia Pope, a Washington D.C. “fixer.” In the series, Pope and her associates assist in managing crises for all of the who’s-who of the city.

Shonda Rhimes, writer for “Scandel,” said Washington’s character was inspired by the career of Judy Smith, a crisis management expert who is the founder, president and CEO of the crisis management firm, Smith & Company. Smith also served as special assistant and deputy press secretary to President George H.W. Bush.

It is unavoidable to recognize that Washington, an African-American female, has continued to assist in paving the way for minority women in America’s mainstream media.

Washington is quickly becoming part of an elite group of women who have contributed to creating a more diverse TV watching experience. Among these women are Queen Latifah, Phylicia Rashād, Gabrielle Union and Whoopi Goldberg.

“It may have taken African-American women a long time to become stars of shows because those who are in positions to direct, produce and write have not been African-American,” Alicia Brunson, instructor of American ethic studies, said. “Those in these positions are targeting a demographic that they believe will bring them the most profit. A lot of changes still need to be made for African-American women to be represented in a variety of ways that truly represent the community. Until more people voice their wants, changes will be slow.”

In each series, the women are influential and are able to prove that they can be just as educated and strong as their male counterparts. This trend of successful black women is able to transcend genre and story plots.

While these women are in powerful positions, many are still concerned about how African-American women are perceived in media.

“When a black woman has a role, it is never 100 percent positive; it is always typecast,” Natasha Peterson, senior in management, said.

Because so few roles in television and in film are for and about African-American women, Brunson said it is vital that directors, producers, writers and actors be mindful on how audiences will perceive the roles that are being portrayed.

“Some may argue that media is just entertainment, but it has influence on various areas of our lives, including identity,” Brunson said. “Youth are large consumers of media that may emulate what they view. Having a positive image may inspire women and give them hope that they can be more than what stereotypes others may place on them.”

Among the women who had gathered to watch “Scandal,” they agreed Washington herself did not influence or encourage them as an actress. The women said there were women such as Condoleezza Rice who encouraged them more as an African-American woman.

There was a general consensus in the show that Pope, while successful, may only be so because of infidelity. The group agreed it seemed as if the only reason Pope had made it to the position she had was because of a series of moral missteps.

“How did [Pope] get so influential? She slept with the president,” Justice Davis, sophomore in business administration, said.

During an open discussion in the “Scandal” watch group, one girl said that “it is like African-American women have to act ghetto or be a mistress to be successful in mainstream media.”

Nearly every woman nodded her head in agreement.

“These portrayals [are] reincarnations of old stereotypes,” Brunson said. “In the case of “Scandal,” Washington’s character would be considered the jezebel. Not only “Scandal,” but other television shows and movies reuse stereotypes. Hollywood film and television is not creative in that way. These images have been repeated over and over again.”

Cheyanna Colbern is a junior in pre-journalism. Please send comments to edge@kstatecollegian.com. 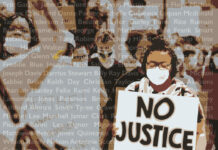