It’s that time of year again when students are stressed, full of anxiety and looking for ways to cope with the pressures of finals week. Some students hit up coffee shops or hang out with friends to take their minds off the brutal week ahead. However, it is no secret that across college campuses, some students are looking to Adderall to give them an academic edge or just to help them stay focused.

Adderall is a drug that is mixed with amphetamine and dextroamphetamine stimulates. It is typically used for the treatment of Attention Deficit Hyperactivity Disorder (ADHD) and Narcolepsy. Individuals typically have to undergo several tests in order to be diagnosed with one of these disorders, and the drug must be prescribed by a physician. However, that doesn’t mean the drug is not easy for students to get their hands on, because in reality it is.

According to K-State’s Alcohol and Other Drug Education Service, a recent survey found that prescription drug abuse among K-State students has increased from approximately 1 percent in 2006 to 12 percent in 2012.

Individuals taking Adderall often believe that because the drug is a prescription, it cannot be as harmful as illegal drugs. This is because typically, when a drug is used as directed, it has beneficial effects on health.

However, Adderall is also known for being a habit-forming drug. A study from the National Institute on Drug Abuse estimated that more than 1.6 million American teens and young adults misused ADHD drugs during a 12-month period, and 75,000 of them became addicted.

Stimulants like Adderall are very easy to become addicted to. Doctors caution that consuming these kinds of pills without a doctor regulating the process increases the risk of addiction and potential overdoses.

Holly Anderson, a licensed clinical marriage and family therapist at Cornerstone Family, said that finals week increases students’ thoughts about using drugs not prescribed to them.

“I think substance abuse comes from feeling desperate or needing to have a quick fix for feeling stressed,” Anderson said. “I think it’s a dangerous thing; you never know how someone’s biochemistry is going to react with a substance.”

Adderall can be a positive drug for individuals who truly have difficulty studying and use the drug carefully. Rachel Arbuckle, sophomore in elementary education and dance, said that Adderall helps her lead a better life.

“As soon as it kicks in, I’m engaged, focused, determined and dedicated,” Arbuckle said. “I feel very organized, like my chaotic life is more pulled together.”

However, providers say that no person reacts to the drug the same way. While some have a positive reaction to Adderall, others become addicted. For others, it may have no effect at all. For this reason, the tests that go into prescribing drugs like Adderall and Ritalin are dependent on the individual and their circumstances.

When it comes to studying, especially in college, students often complain about how difficult it is to find the motivation to study for comprehensive tests or work on several projects at a time. This is when students and young adults look to Adderall to take the stress off.

Anderson said that students need to be more cautious when it comes to thinking about taking drugs that are not prescribed to them.

“I would encourage students to realize that taking a substance isn’t going to change the underlying issues unless you actually have ADHD,” Anderson said. “There will always be opportunities to cut corners and get ahead, but you don’t want to rely on a substance to do that.”

One study done at the University of Pennsylvania found that students who took Adderall didn’t actually perform better on tests of cognitive function — they just thought they did. According to Time magazine’s health section, the participants were asked, “How and how much did the pill influence your performance on the tests?” The participants who had been given Adderall were significantly more likely to report that the pill caused them to do better on the tests, even though their performances did not show an improvement over the participants who didn’t take Adderall.

Cari Cetola, sophomore in criminology and psychology, said she could potentially work without Adderall if she changed her study habits.

“I think I could do as well on schoolwork without Adderall,” Cetola said. “But I would have to be more disciplined when it came to not getting distracted while studying.”

College students look to every outlet possible for motivation to study long hours for final exams or to be able to spend all night working on a project. Each person is different in the way they cope with the stress and pressures of college, but turning to Adderall (for those without the disorders for which it is prescribed) can be a potentially dangerous, unhelpful choice.

No rest for the living: Students start studying for finals during ‘dead week’

Ask a Professor: Finals week advice for stressed out students 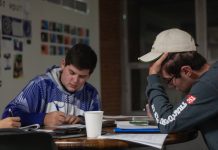