Ryan Mueller came to K-State from St. Thomas Aquinas high school in Leawood, Kan. as a walk-on. Through time, Mueller found himself in the mix for the Wildcats on the defensive side of the ball. Last season, Mueller was in the regular rotation as a primary third down pass-rush type of player.

This season, the Wildcats called on Mueller’s services a lot more than just on third down. The junior started every game for the Wildcats. Along the way, Mueller found his name in the headlines nearly every week. Tying the all-time season sacks record in K-State history with 11.5 on the season, the junior from Leawood proved to be a pivotal component of Bill Snyder’s young defensive group. Mueller finished the regular season with a Big-12 leading 18.5 tackles for loss and four fumble recoveries.

“Of course, I had to expect greatness from myself,” Mueller said about his success after being a walk-on.

This week, Mueller has continued to see his name in the headlines. The former walk-on was named a second team All-American by both CBSSports.com and the Football Writers Association of America (FWAA). He was also named an All-American Honorable Mention selection by Sports Illustrated.

As the Wildcats head back to Arizona for the second straight season to take on the Michigan Wolverines in the Buffalo Wild Wings Bowl, Mueller may be faced with his toughest task yet. Mueller could face the task of going to war against Michigan’s senior left tackle Taylor Lewan.

Like Mueller, Lewan has been found himself on numerous All-American selection lists throughout the week. The 6-8, 300 pound senior was recently named a first time All-American by Sporting News and a second team All-American by FWAA, Walter Camp and CBSSports.com.

“I have seen (Lewan) on tape and I have heard all of the awards that he has won,” Mueller said. “It is obviously going to be a tremendous challenge for me going against arguably one of the best tackles in the country, but I am confident in my ability.”

Nothing has come easy for Mueller since arriving in Manhattan. Ask anyone of his teammates and they will say that Mueller is one of the hardest workers on the team. With the game against Michigan coming up, this could be just another feather in Mueller’s cap.

“I just try to be better than the man across from me because I know that behind all of that stuff, it does not really mean anything it’s what’s inside that makes a player good,” Mueller said. “Obviously, Taylor Lewan has gotten a lot of attention for being a good football player and I am looking forward to the opportunity to go in against somebody who is considered great.”

When asked if he thinks Lewan is being asked about Mueller up in Michigan, the Big 12 defensive lineman of the year smiled and said, 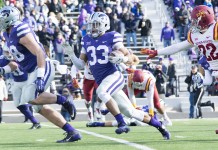 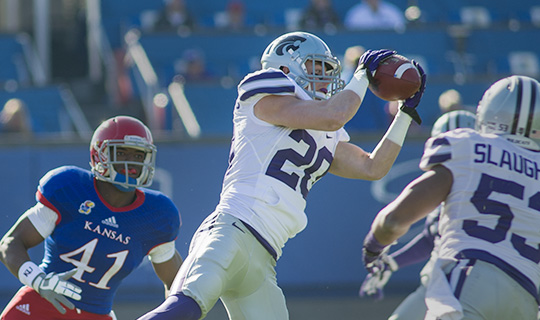