The K-State Wildcats had a non-conference schedule that they knew would challenge them. The Wildcats have had their ups and downs through their first 11 games of their season. But after a big win over No. 21 Gonzaga, the Wildcats can head into Christmas break with their heads held a little higher.

Starting off the season with a loss to Northern Colorado was not exactly the step in the right direction following a season where they split the Big 12 regular season title. The Wildcats continued to struggle as they traveled to San Juan to play in the Puerto Rico Tip-Off. This was another opportunity for K-State to help their resume early on in the season. That opportunity was squandered away.

Despite the loss to Charlotte in K-State’s tournament opener, the Wildcats had another opportunity to leave San Juan with a quality win the next day when they took on the Georgetown Hoyas. Fresh off of a loss to Northeastern, the Hoyas were simply too much for K-State, rolling the Wildcats 90-63.

After defeating Long Beach State for the second time in the early season, the Wildcats left San Juan boasting a 1-2 tournament record and a 2-3 overall record.

Once again it was the pair of Foster and Gipson leading the way for the Wildcats against the No. 21 Gonzaga Bulldogs. The two Wildcats finished with 14 points each, leading all scorers.

It was a back and forth contest until the latter stages when the Wildcats seized control. K-State ended the game on a 21-10 run to grab their biggest win of the season.

Foster has lead the Wildcats in scoring so far this season with a 14.4 point per game average, but what he did at the 16 minute marker in the second half against Gonzaga was more than just a regular basket. Soaring over Gonzaga guard David Stockton, the freshman from Wichita Falls, Tex. threw down a dunk that left everyone in INTRUST Bank Arena stunned. The basket gave the Wildcats an eight point lead, but most importantly, it gave them energy which they’ve appeared to be lacking in many of their previous games this season.

In a change of events, the Wildcats have now won six-straight games going into their Christmas break. The wins over Ole Miss and Gonzaga have given the Wildcats two resume-building wins entering their Big 12 season.

K-State will conclude their non-conference schedule with games against Tulane on December 28th in Brooklyn, NY and then back at Bramlage Coliseum against George Washington on December 31st. 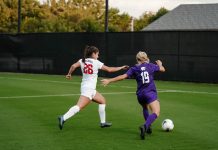