It is said in football that defense wins games, and on Saturday in Tempe, Arizona two defenses will square off to try to stop two above-average offenses to win the Buffalo Wild Wings Bowl. A team can have the best offense in the country, but a solid defense can turn the tide on any opponent.

The last time the Wolverines were in action, they allowed 393 yards to the dual rushing attack of Ohio State senior running back Carlos Hyde and junior quarterback Braxton Miller, who had 226 yards and 153 yards respectively. Even allowing this rushing performance, the Wolverines lost the game by one point, because of a failed two-point conversion in the closing seconds.

The most essential piece on Wildcat defensive might be lining up at junior defensive end Ryan Mueller. The second-team All-American leads the team with 11.5 sacks, tied with Memphis’ Martin Ifedi for sixth in the nation, and is tied for ninth in the nation with 18.5 tackles for loss. Mueller can potentially cause havoc in backfield.

In the middle of the line for the Wildcats, senior defensive tackle Chaquil Reed and sophomore Travis Britz each have 33 tackles on the season and have combined for 10-tackles for loss and five-sacks. These two create a bunch in the middle of the field, and can create issues in the running game for opposing offenses.

Both lines create mismatches up front, and can create timing issues for any opposing quarterbacks.

The linebacker core for any team can be the most important unit on any field. Responsible for the vast majority of the middle of the field, linebackers have a huge load on their shoulders.

The Wolverines’ sophomore linebacker James Ross III might be on the way to becoming one of the best linebackers in the country. Ross is tied for the team lead with 81-tackles. The weak linebacker has potential to cause havoc in the running game, having five tackles for loss on the season.

Junior middle linebacker Desmond Morgan has 73 tackles on the season, but he adds more than the numbers suggest. With three pass breakups and an interception, he adds more depth to the Wolverines linebacker core.

The Wildcats already have an upper-echelon linebacker on the roster, senior Blake Slaughter, who leads the team with 103 tackles. With three sacks and six tackles in the backfield, the Wolverines might want to run around him. The Texas native can also defend the pass, having three break-ups and an interception. Slaughter is the key in the middle of the defense.

Weak linebacker Jonathan Truman is also a key to the group. With two forced fumbles on the season, Truman is an essential piece to stop the run for the Wildcats.

The Wolverines are led in the secondary by excellent cornerbacks. Junior left cornerback Raymond Taylor has 81 tackles on the season. Taylor has four interceptions on the season to go with four break-ups. On the other side of the field their best cover corner, junior Blake Countess, leads the team with six interceptions and six break-ups. Throwing to either side of the field will be hard for the Wildcats.

The Wildcats have a solid cornerback rotation with seniors Dorian Roberts and Kip Daily each registering three interceptions. Junior Randall Evans has also had his moments at cornerback, showing that he is ready to compete with 59 tackles and two interceptions. Evans also leads the team with 10 pass break-ups on the season.

The free-safety position is where the Wolverines run into an issue. Sophomore Jarrod Wilson is the better safety over senior Courtney Avery, but a hand injury kept Wilson out of the Wolverines last game. Without Wilson playing at peak performance, the Wolverines are at a disadvantage.

The Wildcats strong safety sophomore Dante Barnett is a force in the middle of the field. Barnett matches up well with Gordon, with three interceptions and two fumble recoveries, Barnett is able to find ways to get the ball back to his offense.

The question mark of the Wildcats defense is senior safety Ty Zimmerman. Coming of an ankle injury that has kept him out of the last two game. The Junction City, Kansas native is in the exact same position he was in last year when he returned from an injury against Oregon in the Fiesta Bowl.

With both teams’ free safeties coming off of injuries, they are hoping from strong performances from the returning stars.

A well-rounded defense will be the key to the Buffalo Wild Wings Bowl. Look for huge plays by both teams’ defensive lines and linebackers to try to limit the play-calls by the opposing offensive coordinators. Also, look for big plays for both offenses against secondary’s that could have holes. 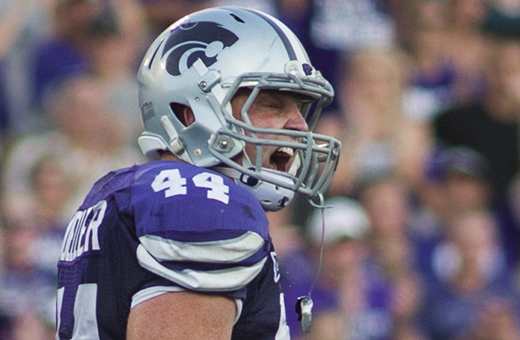