The Kansas State women’s basketball team had aspirations of pulling off back-to-back upsets over conference foes. After an 80-74 win over Iowa State on Jan. 18, the Wildcats traveled to Waco, Texas to face No. 10 ranked Baylor Wednesday. From the beginning tip, K-State was outmatched. The Bears rushed out to a double digit lead, and finished the first half on a 29-0 run. The Wildcats made a small dent in the lead in the second half, but ultimately it wasn’t enough, as K-State fell 71-48. The loss dropped K-State to 8-10 (2-5 in the Big 12). With the victory, Baylor moved to 15-3 overall (5-1 in the Big 12).

Freshman forward Breanna Lewis finished with 14 points and eight rebounds to lead the Wildcats. Sophomore guard Brianna Craig added 13 points and recorded five assists on the night. The offense was out of rhythm all night, due largely in part to the Wildcats 21 turnovers and Baylor’s high pressure defense. K-State shot a meager 35 percent from the field and struggled from behind the arc, going 4-24.

K-State freshman point guard Leticia Romero struggled from the get-go. Baylor’s defense was focused primarily on limiting Romero’s playmaking ability. The Bears forced Romero into six turnovers and held her to six points on 28 percent shooting from the floor. While Romero has been stellar all season long, she will likely see defenses very similar to Baylor’s from here on out. The Wildcats rely heavily on her to initiate the offense and penetrate into the lane.

The final score of Wednesday’s game was not ideal, but wins on the road in the Big 12 conference are never easy. A bounce back win against a solid KU team on Saturday could help the Wildcats start moving in the right direction. 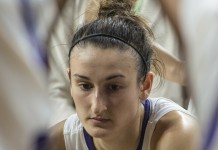