Coming off a dramatic loss, the No. 22 K-State men’s basketball team (14-5, 4-2) is set to take on the No. 16 Iowa State Cyclones (14-3, 2-3) tomorrow in Hilton Coliseum, who are mired in a three game losing streak after beginning their season undefeated.

Despite their recent struggles in losses to Oklahoma, Kansas and Texas, Iowa State is still one of the best teams in the Big 12 and will have the support of one of the conference’s loudest crowds at the Hilton Coliseum in Ames, Iowa.

The Cyclones are in the middle of a brutal opening stretch to conference play, which started with Baylor, and includes two games against the No. 8 Jayhawks as well as match ups with No. 25 Oklahoma and No. 11 Oklahoma State. Of their first eight conference games, six were or will be against ranked opponents, and one other was a loss to Oklahoma before they were ranked.

While this makes their three-game skid seem less disappointing, the Cyclones had high hopes two weeks ago with a zero in the loss column and a top 10 ranking.

The same night that Iowa State’s 14-game win streak came to an end at the hands of Oklahoma, the Wildcats had a 10-game win steak of their own snapped in Lawrence against Kansas. K-State rebounded with two solid wins, but suffered a heartbreaking buzzer beater loss in Austin, Texas at the hands of the Texas Longhorns.

“I think we’re handling it pretty well,” said junior forward Thomas Gipson of the loss. “It’s still sad that we lost, but we have to move forward and be 1-0 in every game.”

This game is a chance for both teams to rebound: Iowa State from a losing streak and K-State from a heartbreaking loss.

Iowa State’s offense has been rolling all season, pacing the Big 12 with 85.1 points per game this season with four of their players averaging over 10 points per game.

Cyclone senior forward Melvin Ejim leads the team with 17.7 points per game and is grabbing 7.1 rebounds per game. Fellow senior DeAndre Kane is second on the team in points (16.7) and boards (7.2) per game. The guard also leads the team in numerous categories including assists (5.8) and steals (1.6).

Sophomore Georges Niang is a dangerous forward, averaging 15.2 points per game, while junior forward Dustin Hogue is putting up 12.2 a game on a team-high 54.7 percent shooting. Hogue also leads the team with an impressive 9.1 rebounds per game.

“He can create for others, he can shoot, he can dribble, he’s shifty, he’s a good player,” said Gipson of Niang, who he will be tasked with guarding. “It’ll be a challenge, but I’m ready for it.”

K-State has been led all season on offense by freshman guard Marcus Foster, who enters the game averaging 13.7 points per game, but was held to just eight points on 3-12 shooting in Texas.

Right behind him is Gipson at 12.5 points per game on a team-best 59.9 percent shooting. Gipson also leads the team in rebounds with 6.2 per game.

Senior guard Shane Southwell is the third and final Wildcat averaging double digit scoring with 11.6, and has been hot recently with 49 points in his last three matches.

The matchup will be an excellent one between two ranked teams who are fighting to stay in the race for the Big 12 title. Tipoff is slated for 12:45 p.m. in Ames. 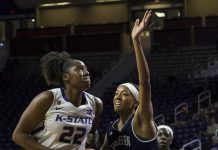 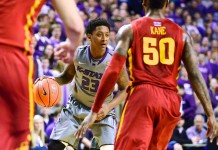 K-State welcomes No. 12 Iowa State to town in a must-win game for both teams 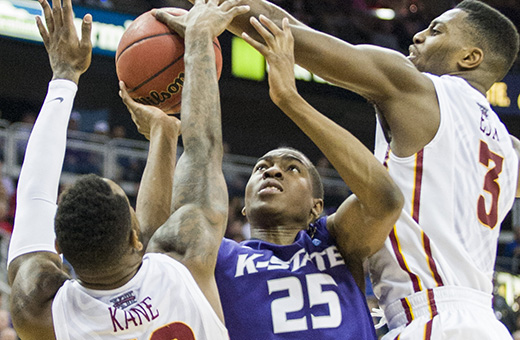