I hope your new classes are off to a good start and that you’re surviving the cold temperatures — spring is on its way, or so they say!

Since being elected last spring, one of the top priorities Jake and I have had in office has been to do all we can to improve technology at K-State; to move us into 2014, so to speak. We’ve successfully added mobile charging stations to a number of high-trafficked buildings around campus (like Hale Library, the K-State Student Union and the Leadership Studies building) and we’ve added a wireless Internet report link to K-State Online for those areas on campus, as unfortunately numerous as they still are, where Wi-Fi lacks reliability.

But that’s not yet enough; there’s more to do in the next three months before we leave office. Over the next several weeks, SGA’s Student Centered Tuition Enhancements Committee will be considering a proposal we’ve worked on with Information Technology Services that would provide funding for drastically improved wireless reliability and accessibility in one of campus’s most high-profile and high-trafficked buildings: the Union. We’ve found over the last few months that money is most often the factor preventing a rapid, full-scale overhaul of wireless Internet in campus buildings. With limited resources, we have to take small steps and focus on the most used buildings, like the Union, first and foremost.

We’ve also been sure to articulate our ultimate goal of a comprehensive app for smartphones and tablets to numerous individuals around campus who are involved with information technology and mobile development. It’s a slow process, but we’re pleased with the expanded pilot this semester of Canvas, the likely platform that will replace K-State Online in the future. What’s most exciting are the mobile possibilities associated with Canvas. Unlike K-State Online, Canvas is easily integrated into an app and will likely be in K-State’s future if the expanded trial this semester goes well. We’ve added Jordan DeLoach, sophomore in computer science, to the KSOL Advisory Board to continue to push this process forward as we do the same.

Finally, improvements are in the works for iSIS as well — long overdue, I know! K-State’s team of excellent iSIS administrators is currently accepting proposals for a long-term solution that would also provide mobile app options. In the long run, the goal would be to combine this app with the Canvas-integrated one in order to create a one-stop, easily-accessible, student-friendly app where the day-to-day needs of students could be fulfilled. As we all know, time is of the essence on this project, and we’re working to do all we can to expedite the process.

Is Canvas painting a new picture for students? 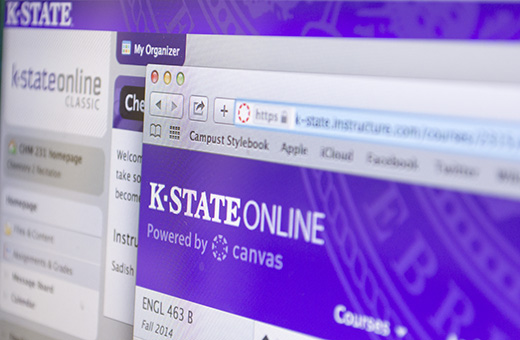