In keeping with a nearly 20-year trend, wine sales and consumption have continued to increase in the U.S., making the nation the world’s largest wine market.

According to a April 8, 2013 press release from the Wine Institute, the public policy advocacy association of California wineries, wine shipments to the U.S. market have risen by approximately 50 percent since 2001.

In 2013, wine sales experienced a 2 percent increase in sales from the previous year. The increase trend is also true in Manhattan, where local liquor store owners say wine consumption has been steadily increasing over the past few years.

“Before, in a night, our business would be mostly beer and liquor,” Chris Vanderlinde, assistant manager at Rickel’s Retail Liquor, 1129 Bluemont Ave., said. “Now, wines have become almost half our business any given night.”

Reasons for growth
One widely agreed upon speculation for the wine industry’s growth has been the shift toward producing and marketing less expensive wines. According to Vanderlinde, the general population has also appeared to develop a greater appreciation for the complexity of wines.

“Wine was fairly expensive for a while, but now with the increase in demand, better technology and education about wine, the prices are coming down,” Vanderlinde said. “This has made wine a convenient alternative to beer, which has worked well for the wine industry.”

Kristen Clarke, tasting room associate at the Oz Winery , 417 Lincoln St. in Wamego, said there is an intrigue surrounding wine as a whole, specifically its health benefits and how those benefits have contributed to an overall growth in the industry.

“The way wine is crafted is so individualized based on the winery itself,” Clarke said. “There’s more to learn about each particular style that intrigues people. Additionally, the research that supports all of the health benefits, I’m sure, makes people more inclined to imbibe as well, which has been beneficial to the industry as a whole.”

Buying the right wine
Everything in the wine-making process, from the soil used to plant the grapes to the time it takes to be fermented, determines the flavor of the wine. Personal taste also factors in, ensuring that no two types of wine taste exactly the same.

“Wines are more complex than other alcohol so you really have to find one you enjoy,” said Greg Shipe, manager at the Davenport Orchards & Winery, 1394 E. 1900 Rd. in Eudora, Kan. “When you taste them, you’re able to find one that you like more than others, even in the same category. Which, to an extent, has been beneficial in allowing people to develop pallets.”

According to Vanderlinde, one of the major misconceptions is that price is a direct indicator of the quality of the wine.

“People seem to think that a $40 of wine is better because it’s priced higher, when that’s not the case,” Vanderlinde said. “Everybody’s taste buds are different and reacts to wines differently. So, even though they think the more expensive one would be better, they might like the taste of a less expensive one even more.”

The preferences of wine drinkers can be just as complex as the wine itself.

“I was taken in by how complex the nature of wine is,” Tyson Carpenter, junior in geology, said. “There’s a lot to it. Lots of perspectives and overall of types which makes it so much more interesting. Compared to hard alcohol and beer, wine is a whole different animal.”

For others, it is a means of understanding a foreign culture in an entirely new manner

“When I travelled to Italy with my parents, I was able to try some wine in order to experience the culture of the country,” Eric Long, junior in psychology, said. “I was instantly taken by how good it was. Through exploring my interest in it, I was able to understand a lot more about Italian culture.”

Another topic of contention between wine drinkers in Manhattan is their preferences in its packaging; wine can commonly be bought in a box or in its traditional bottle form.

Many people believe boxed wine is inferior to its bottled counterpart.

“Anybody who buys boxed wine, in my opinion, is doing themselves a disservice,” Long said. “I’ve tried both and would honestly choose a bottle over box, every time.”

According to Vanderlinde, current Manhattan wine sale trends agree with the idea that the city’s residents prefer bottled wine over the boxed.

For Carpenter, the complexity of making such a choice is part of the appeal of wine.

“I usually believe in, ‘To each their own,'” Carpenter said. “There are good and bad things about each, but as I said, different people can react differently to the same wine. It’s all part of the magic when it comes to wine.”

The most popular wines shift during the year, depending on the season. According to Shipe, red wines are more popular during the winter months while white wines start selling better once the weather gets warmer.

Vanderlinde said he believes that endorsed or themed wines will increase in popularity in the near future, at least in the Midwest.

“A really surprising one was the ‘Duck Dynasty’ wine that they’re making,” Vanderlinde said. “When I first heard about it, I thought it was a joke. But they’re actually making it, and we’re selling it now. With the following of the show, I expect it to do fairly well.” 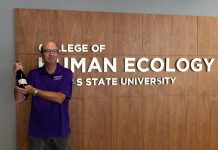 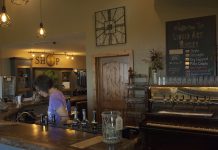 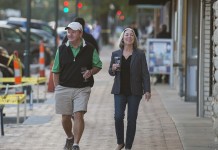